A book for the birds 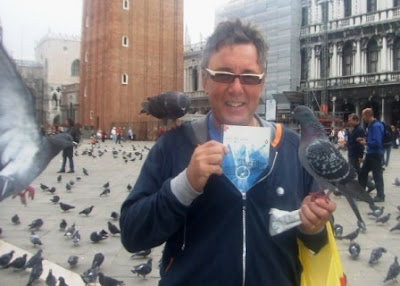 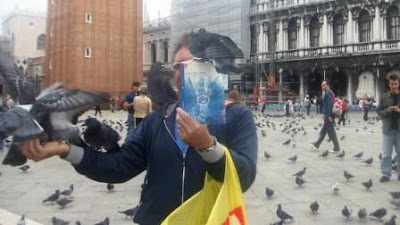 One of those great travel shots of The Blue. This time in St Mark's Square, Venice, courtesy of Alan who is sharing the book with the locals, and Deb who snapped the pic after they'd been to the Rugby World Cup in France last year. The thing is the pigeons really do look rather taken with it. Unfortunately, there are no pigeons in The Blue, but there are multiple appearances by chickens, shearwaters (mutton birds), mollymawks, seagulls, and tui. I do, I confess, have a bit of a thing for birds.

It was the start of the day and the calling of the chickens. Lilian loosened the gate of the run and ducked her head to enter, giving a thin high whistle at the back of her teeth as she did. It was either that or the clang of the scrap bucket against the gate post, but by the time she looked up they were out of the hen house and running across the hard earth. It didn't take much, only the smallest whistle and the single knock of a bucket, and Lilian was besieged by birds.

Opening of The Blue [appropriately published by Penguin 2007]

MORE ON BIRDS: post updates [10.21 am/1.17 pm] - Australian writer Gondal Girl has blogged on birds too! I know she's interested in them and today (roll down her post a little) you'll see she talks about a book called Corvus by Esther Woolfson which looks at the connection between birds and humans. More strangely, I am due to review the book later in the month on National Radio [it hasn't arrived yet but I'm looking forward to it.] And Fifi Colston's lovely velvet birds are up on her blog. I covet one of those but missed out on her last exhibition, I see there's another one coming up...

And nothing to do with birds but equally fascinating, there's a post up on Vanda Symon's blog today about a writer session in Dunedin discussing the Burns fellowship and the place of Maori writing in literature. Keri Hulme, Witi Ihimaera, Renee and Rawiri Paratene were on the stage.
Posted by Mary McCallum at 12:10 AM

How lovely to see your book around the world! Great idea. And I have often admired the cover, the design and colour are fantastic.

Thanks for the link to my Burns Festival posts.

The festival was (big sigh) wonderful and I was blown away by the honesty of the writers.

Better start polishing up next year's application for the fellowship.