practically perfect in every way 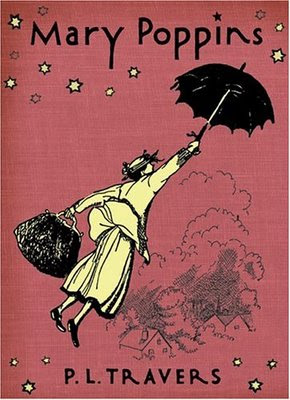 'In January 1907 Travers Goff [father of Lyndon known later as P.L. Travers] feared he was about to be demoted [at the bank where he worked] yet again; he became ill with a high fever, and died several days later. His daughter Lyndon was seven, the oldest of three little girls. Some time afterwards her mother, still grieving, ran out of the house during a thunderstorm, crying that she was going to drown herself in a nearby river.

'Lyndon wrapped a quilt around herself and her two younger sisters, and told them the story of a magical white horse that could fly even though it had no wings. Retelling this tale in adulthood, Travers identified it as the origin of her authorial identity; as Lawson observes, 'Lyndon believed the magic horse ran underground, and came up eventually as Mary Poppins.' ' The Daily Telegraph
Go here for more of this fascinating article on Mary Poppins and author P.L Travers. It's written by UK author Justine Picardie who also talks about it on her blog here. Picardie reminds us that the book was written in the 1930's and so is freshly relevant in the recession of today; it's also a darker work than the Disney film. Little known fact: Mary Poppins was published by Peter Davies who was the adopted son of J.M Barrie and the inspiration for Peter Pan.

If you're a really keen Poppins follower, go here to read Neil Gaiman's blog which among other things (roll the post down) talks about a book called Myth Symbol and Meaning in Mary Poppins - the Governess as Provocateur, by Georgia Grilli, introduction by Gaiman. I'm sure Mary Poppins would have had something to say about that.
Posted by Mary McCallum at 10:53 PM