then she found me 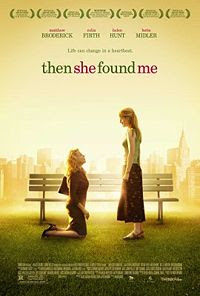 Loved this film. Helen Hunt directs it and plays a woman called April who is refreshingly real as a woman of 39 who loses a child of a husband (Matthew Broderick), wants a proper child of her own and has her birth mother (Bette Midler) turn up out of the blue.

There's none of that Hollywood face-concrete, long-shots and clever lighting to cover up that fact that Hunt (in her 40's I gather) has lines and isn't 20 anymore. And then there's Colin Firth (divorced husband who fancies her) - who's more dishevelled than D'Arcy-like. Things are unpredictable, messy, and humiliating, children have tantrums and get sore ears, people have 'break-up' sex .... just like real life. The dialogue is great. Oh and watch for a cameo by Salman Rushdie (I kid you not).

In terms of story-telling, I was impressed with the compression at the start of the movie with four scenes: the wedding, the dodgem cars, the mother in hospital and the 'I've made a mistake' scene summing up a stack of stuff about both April's problematic upbringing and her failed marriage.

Some things are glanced at rather than explored in a way that happens with movies that come from books (Elinor Lipman wrote this one), but generally at the end you feel like you've had a complex and satisfying meal rather than the cardboard snacks too often served up at the movies these days.

Here's Wikipedia on the movie and the trailer.
Posted by Mary McCallum at 11:23 AM