Tuesday Poem: The wind was

This is how bad the wind was --
the cat ran to the sea wall, turned
tail and ran straight back, ears flattened.

This is how bad the wind was --
light fittings shook inside the houses,
and inside it was like someone breaking in.

This is how bad the wind was --
when people crossed the street
a cardboard box crossed with them.

This is how bad the wind was --
an old man in a coat tottered as he left
the bridge, looked like he might fly.

This is how bad the wind was --
as bad as Featherston's which is,
you said, second only to Tierra del Fuego's.

This is how bad the wind was --
but you won't know it now after taking
that car, that road, that day to Oban.

This is how bad the wind was --
but you are here, aren't you?
Unflustered,

The art of mascara isn’t hard to master. It just needs a firmness of touch, and a wiggle before the brush leaves the lashes. I’ve applied it on the run: on the toilet, eating breakfast, driving to work – one hand on the steering wheel, one on the mascara wand, both eyes on the road. I swear, I’d only look in the rear vision mirror once or twice to check I hadn’t missed anything.
That last time was different. Something scratching – a dislodged lash? The mascara clogged on the brush. I remember tipping the mirror and looking deep into the weeping white of my eye.
The flash of yellow came out of nowhere. Tiny candy-pink tights cartwheeling. One shoe. On the bonnet, the daisy from the little yellow hat. That’s all I see now, and I refuse to frame it. I can’t. No more black plasticky lash-paint for me.
Lashes, only lashes.

Walk in on them, four poets eating scones, plates

on their laps, caught like teapots in a cupboard. That
room, once the music room, once a bedroom
for spinster sisters, built in a time of family bibles,
angular blue glass bottles, brick chimneys.
The room now: bar heater, laptop, plate
of softening butter, poets of some standing,
sitting at odd angles, collar bone, ankle bone,
swallowing cooling tea in gulps, eyes shifting
to the blocked fireplace, the unprepossessing ceiling,
not letting on a feeling that the air is constricted, that
they are the wrong size doll for this doll’s house,
that the chimney creaks, could well be falling, that
in a cavity in the ceiling, a child’s clothes were found.

It's the AGM of the Randell Cottage Friends Committee tonight at 7 pm at the cottage: 14 St Mary Street Thorndon, all welcome. After a brief meeting, we'll have drinks to celebrate the first 10 years of the writer residency. All welcome.

I am the Chair of the Friends Committee as well as being a Trustee, so I will be there with bells on. The Randell Cottage Writers Trust is a writers residency in the 1867 Randell Cottage in Thorndon, and I wrote this poem when Kirsty Gunn was living there - an expat NZer who'd come home. She invited some fellow poets to tea and scones and they came.

Btw, Kirsty has just published a new novel Big Music with Faber. Thrilling. If you're in London, the launch is at James Daunt's on Holland Park Avenue from 6 pm, Wednesday July 4. Here's a video about the book.

It's Tuesday - so check out a fabulous CHEESE poem on the Tuesday Poem hub (click the Tuesday Poem quill in my sidebar) or go HERE, and then check out the cheesy and non-cheesy poems in the sidebar there. Definitely worth a look.
Posted by Mary McCallum at 12:28 AM 6 comments

An exciting shortlist for this years Book Awards - scroll down to see it. All women in the fiction and poetry lists, and two short story collections, could the latter be a first? (The former isn't - in 2008 we had an all-woman fiction and poetry shortlist including my novel The Blue.)

Some of my favourite books of the year are there: Sue Orr's From Under the Overcoat, Fiona Kidman's The Trouble with Fire, Anna Jackson's Thicket, Dinah Hawken's The leaf-ride; and in the non-fiction list:  Fiona Farrell's The Broken Book and Peter Wells' The Hungry Heart. I haven't yet read Rangatira or Shift but have them on my shelves and will do...

All the non-fiction choices look superb too - I have handled them all at the bookshop where I work on Fridays. They're beautifully produced - real treasures -- especially Peter Wells' book.

My favourites are there, so I am happy, but already I'm thinking about the books that didn't make the very brief lists of three in the fiction and poetry categories. Wulf by Hamish Clayton which won Best First Book of Fiction this year (announced last week) is one that occurs to me. Given its quality, I wonder if a longer general shortlist might not have seen him included.


Many readers were gunning for Sarah Quigley's Conductor (not me) and Owen Marshall's The Larnachs (haven't read it.) Then there are those strong collections of poetry by Vincent O'Sullivan, Jenny Bornholdt and Peter Bland ... Certainly the judges this year have said they would have liked to have had a shortlist of five for these categories as we had in the past.

I also note that the excellent La Rochelle's Road by Tanya Moir hasn't received a mention in the awards, which is a shame.  It's a first novel and the runners-up for Best First Book aren't announced - but I really think they should be. It's such a boost for a first time author to get that sort of acknowledgement.

Book Awards judge Chris Bourke:  “Having all the categories restored to five finalists would more accurately represent the quality and breadth of New Zealand’s writing. The same diversity is present in the fiction and poetry - and should be reflected in the shortlists.” Yes, good idea. And a shortlist for the First Book Awards, Chris?


I am betting there'll be some discussion on this on Beattie's Bookblog...  And here's an interesting write-up by the Listener's Guy Somerset  including a podcast of Chris Bourke talking us through the shortlists.

Posted by Mary McCallum at 9:29 AM 1 comments

It will always be difficult to get to
the heart of justice because it is girded
so that every approach meets a moat
of jus, a sticky reduction wherein
the stain of a thousand righted wrongs, long past,
reside; and the whole edifice of justice
is severe: its modes hint more of the stick than
of the carrot, more of reptilian scales than of
warm yielding flesh; yet justice, at its heart,
and you won't find this by staring at
the word, is love in action, or should be,
at its best: behind its stony wall lurks
understanding, even mercy, to enfold us.
If the heart of justice is unhinged,
it devolves to the mere markings of a ruler,
a frigid adherence or, as the broken word
thinly gasps, 'just ice', a fraudulent
liquid of no lasting substance; but when
justice is rendered potent by love, even a blind-
folded woman, struggling with ancient
instruments, should be able to get it right. 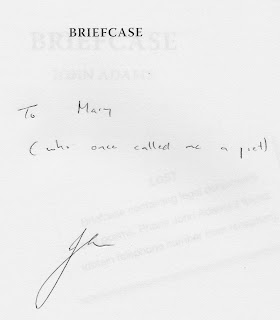 Judge John Adams' first collection of poetry Briefcase has just won the NZ Society of Authors Best First Book of Poetry award. Five years ago, I was John's tutor for Massey University's extramural creative writing paper, and amongst other things said in the heat of feedback, I called him a poet. Which he clearly was, from the very first poem I read.

It was called 'Yellow' and I can remember it on the page - a tumble of language that shouted and sang and jived and bananaed and earned itself an A. I also remember marking 'Justice' - a delicious word play that appears in Briefcase; a poem that takes the word apart literally in a way that seems playful but has serious intent and an unexpected heart.

After doing the Massey course, John Adams studied for an MA in Creative Writing at the University of Auckland, and Briefcase (AUP) is the result. I am so proud! I have to say John is also a very nice person with a wide-ranging intellect, a remarkable curiosity, and a passion for both law and poetry. He is a judge of both the District and Family courts. 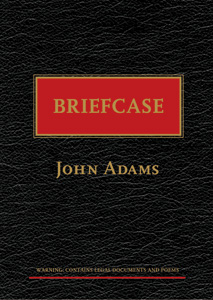 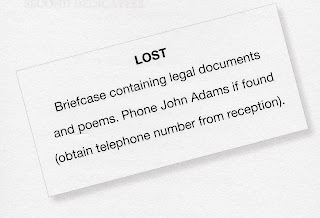 It's hard to do 'justice' to this book called on the back a 'disorderly novella'.  There is a story here about a couple called the Buttons who get into a fight, a stapler is thrown and hits Verity, the wife. Did her solicitor husband throw it at Verity (meaning Truth) deliberately? That's for the courts to decide. The idea is that Briefcase contains the legal documents, court reports, police reports etc, of the case, as well as some other stray documents: a sudoku puzzle, a menu, a dictionary entry... and a number of more conventional poems like 'Justice'.

Playful, yes, but at heart, like 'Justice', the collection is a serious exploration of both the ideals and limits of language and justice - and it's a provocative and fascinating read. As the judges of the NZSA award said, John Adams'  'experimentation with form depends upon the heart as much as it does the intellect.'

I plan to post another poem from the collection at the Tuesday Poem hub later this month. Meanwhile, I recommend you go there to read a poem by a UK poet about birth from the father's perspective posted by Kathleen Jones - and then get into the sidebar for more marvellous poems from the TP team. 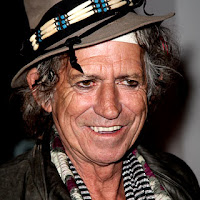