*The winner of the Booker Prize this year is about to be announced. Whatever it is I haven't read it. I've usually assailed one or two of them, but not this year. Linda Grant's The Clothes on Their Backs (Virago) is the one I am most attracted to but wonder if Sebastian Barry's The Secret Scripture (Faber and Faber) might not win? Although, I think it would be exciting to see first-timers like Aravind Adiga or Steve Toltz take it away.


I read Anne Enright's The Gathering purely because it won the Booker last year, although I was nearly put off reading it because it pipped a certain NZ author (sad but true) and because nay-sayers called it a depressing read. I picked it up at last because one of the judges said it had the best last line 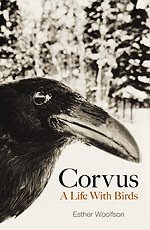 he'd ever read, and because reading the first two pages the prose struck me as exquisite. It was.


*This lovely book has arrived. I mentioned in my bird post on Monday that I was delighted to discover another writer/blogger Gondal-Girl across the ditch is reading this memoir. She, like me, is fascinated by birds. Already I am captivated by the cover of Corvus and the fine production by Granta. I'm reviewing it for National Radio on October 30 - the day after Wisdom by Andrew Zuckerman and the day before Memories, Dreams and Reflections by Marianne Faithful. 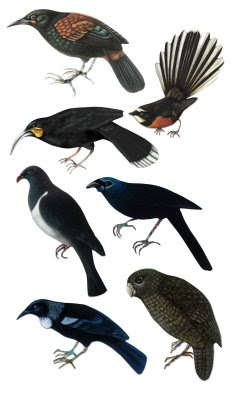 *And while I'm on about birds again - here are the stunning velvet birds my friend Fifi makes which I also mentioned in the last post. They are simply lovely, and she says on her blog she has some left and will take commissions if the one you want isn't available.


*Meanwhile, Graham Beattie has graciously asked me how the Open Day went at the Randell Cottage for writers in Wellington on Sunday. As I explained in an earlier post, the historic cottage is home to NZ and French writers for six months each a year. In between writers, we open the doors for the public and for the cottage supporters. (I chair the cottage's Friends' group).


We also hope the Open Day might attract interested writers who want to try and imagine themselves working there. We are calling for applications for the NZ writer now.


So here's the report: It was an exquisite Wellington day with people swimming at Days Bay, and others visiting the last of the tulips at the Botanical Gardens up the road from the cottage. So you can guess we didn't get too many out-doorsy types, young families, or garden fans.


Our visitors were people who liked books, people who liked writing, people who liked historic cottages and Francophiles. Amongst them were City Councillor Ian McKinnon and a number of Foundation Friends of the cottage who donated money to the residency when it began seven years ago. They included NZ Books Abroad's Louise Wrightson, former diplomat now Nine-to-Noon-book-reviewer Bruce Brown, children's book reviewer and assessor Barbara Murison, and arts patron Jeanette Bornholdt. (The list of Foundation Friends runs to 30 people plus.)

Internationally recognised children's author Beverley Randell Price, whose family donated the cottage, was also at the Open Day along with a number of members of the Trust and its Friends committee. Cottage enthusiast and member of both the Trust and the Friends, Fiona Kidman, was on deck all day!

I turned up at 2 pm, nicely placed for the 4 pm drinks for the cottage's supporters. We were thrilled to be joined by composer Jack Body who is involved with the Douglas Lilburn House. One project the Friends' group is working on is to link the Randell Cottage more closely to the two other residencies in Thorndon: the Lilburn, and the Rita Angus Cottage, as well as the Katherine Mansfield birthplace. So watch this space.

Over and out (until the Booker results).
Posted by Mary McCallum at 9:26 PM

I hope you post your review on the blog Mary, as I would love to hear what you think. It is one of those books I keep thinking on even when I should be doing something else.

Also love Fifi's birds, so lovely, have emailed her to see if the can fly to Australia.

Also re: Booker Prize, Clothes on their backs does seem the most alluring. Perhaps we Aussies can claim a half win...since Aravin Adiga spent time here? :)

Thankyou Mary! And thankyou Gondal-girl. I got your e-mail- didn't know it was you, and I am happy to make my birds fly across the Tasman.

Yes, GG, by all means claim Adiga. I am thrilled a first-timer won the prize. He must still be pinching himself. And great you want one of Fifi's velvet birds. [Fi, when I save up enough I'll be knocking on your door asking for one too. Maybe I should start trying to earn enough instead spending all this time on my blog...!]