The Starlings by Tim Upperton

Anger sang in that house until the scrim walls thrummed.
The clamour rang the window panes, dizzying up chimneys.
Get on, get on, the wide rooms cried, until it seemed our unease
as we passed on the stairs or chewed our meals in dimmed

light were all an attending to that voice. And so we got on,
and to muffle that sound we gibbed and plastered, built
shelves for all our good books. What we sometimes felt
is hard to say. We replaced what we thought was rotten.

I remember the starlings, the pair that returned to that gap
above the purple hydrangeas, between weatherboard and eaves.
The same birds, we thought, not knowing how long a starling lives.
For twenty years they came and went, flit and pause and up

into that hidden place. A dry rustle at night, fidgeting, calling,
a murmuration: bird business. The vastness and splendour
of their piecemeal activity, their lives' long labour,
we discovered at last; blinking, in the murk of the ceiling,

at that whole cavernous space filled, stuffed like a haybarn.
It was like gold, except it was more like shit and straw,
jumbled with their own young, dead, desiccated, sinew
and bone, fledgling and newborn. Starlings only learn

a little thing, made big from not knowing when to leave off:
gone past all need except need, enough never enough.


This is a favourite poem of mine by Palmerston North poet, Tim Upperton, who is also at the Tuesday Poem hub this week. It is from his collection A House on Fire. I love the craftedness of it, the sounds of birds and people - soft and maddening at once - evoked with words like 'thrummed' 'chimneys' 'dimmed' and the blissful 'murmuration', the secrets in rooms and eaves and hearts, the gold and the murk, the unwinding emotional centre. Fabulously fairytale and sadly real at once. Thanks Tim for letting me use your poem here.

You can hear it read.

The Starlings was selected for the Best NZ Poems 2009 and Tim explained it there:"The starlings" was originally an informal epithalamion, a poem to commemorate the wedding of my sister, Katrina, and her husband, Steve. That version was, appropriately enough, a lot more celebratory than the final version you see here. The poem includes details my sister would remember, such as the immense starlings' nest in the ceiling of our family home.

I kept revisiting and revising this poem following its first publication in the NZ Poetry Society's anthology, tiny gaps (2006), and each time it got a little darker than before – notes of elegy seeped in. A last-minute change before my first book of poems, A House on Fire, went to print last year was the addition of the word 'murmuration' – a lovely old collective noun for starlings.'

Now see Tim's poem at the Tuesday Poem hub.
Posted by Mary McCallum at 12:49 AM 5 comments

all night the wind
changes its mind

This delicious snippet of a poem was dropped around Greytown by 'guerrilla' poet Madeleine Slavick as part of the Greytown Arts Festival over the weekend -- and she persuaded a bunch of other poets, including myself, to do the same. She's like that: likes poetry to walk around on legs rather than let it quietly sit in the corner embroidering. Madeleine's from the States but has lived in Hong Kong for some time; now she lives near Masterton.

So we poets walked the streets rolling poems like cigarettes and sliding them into hedges, slipping them flat and upright between bottles on shop shelves, sticking them with cellotape to maps and onto shop signs.  Madeleine's best 'drop' was down the front of poet Pat White's artist wife Catherine Day. It was this very poem on a small square of blue paper and it sat there on Catherine's chest for the rest of the afternoon.

Madeleine took delight in saying to the locals gathered at cafes, 'Short blue or long white?' And they chose either this little wind poem on blue or a longer poem on white. Sometimes she started reciting. I think Featherston-poet-formerly-of-Belfast Simon Fleck might have recited some too.

I was proud of my 'drops' -- especially the one between the feathers of a metal moa (following Madeleine's lead) and one slid into a summer top on a posh shop mannequin. The shop owner looked a little startled but said it would be fine for now. When I passed by five minutes later, it had gone. Taken or binned? I only posted one poem all over the place - Translucent which is about crossing the Rimutakas - you can see it in the post before this one. But I made it nice - used an old tin box of paints and painted white lightly over the poem (for the clouds) with a dash of blue where it talks about the blue sheep truck. Very, um playcentre.

John Horrocks didn't print off his poems off like the rest of us, let alone apply paint, he simply took a pair of scissors to one of his books of poetry. Very Dada. Madeleine was disappointed he didn't do it in front of people on the Main Street of Greytown. There's a poem -- hack! -- and there's another one -- snip! What he did do was stick a poem about slaughtering a pig onto the butcher's sign, which made Madeleine laugh a lot.

Saradha Koirala slipped a poem called Amsterdam, printed on white, into a hedge -- and a mother with a pram stopped, read it, and carefully put it back. I saw and said, 'take it!' She said, 'Oh it's so Amsterdam' and took it. The poems in the hedge went quickly. Somewhere I have a picture of them that I'll post here. Tim Jones marched manfully around Greytown distributing what looked like over 100 poems. He seemed more proactive about pushing them into people's hands. It must be the way he does it, he's got a large and friendly smile, I didn't see any being binned.

After we'd been guerrilla poets for an afternoon, we gathered at the Town Hall with other poets and did what poets normally do: read poems.

I love to think about where our 'guerrilla' poems have gone. I'm guessing some are still sitting there, on maps or statues or between bottles of chutney in the deli. Others might be on people's fridges at home or tucked inside a baby's pram. I'm not sure if Catherine's still wearing hers. I'll have to ask.

and the scraped landscape is in the thick
of it – although thick isn’t the word, really
– tender the cloud stroking the cut earth,
tender the light as it feels its way through.
All is gauzy. Filtered. The blue
of the sheep truck we lose on the bends
the only colour. See, Helen, you can
touch clouds. Live in them, even. Tenderly,
we make our way up and over. So
light, so lit, we’re luminous. It’s like flying,
and all we talk about on the way down. 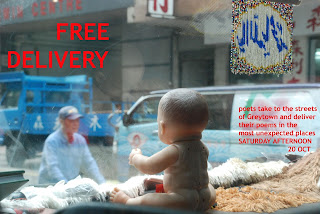 Yes I have posted this poem before but I am doing it again because I'll be going over the Rimutakas this Saturday with fellow poet John Horrocks in my speedy Suzuki Swift to take part in the Greytown Arts Festival.

When we get there, I'll be leaving this poem in unexpected places as part of a groovy little event called Free Delivery. John and Saradha and Pat and Madeleine and a bunch of other poets will join me. A great idea by Wairarapa local Madeleine Slavick who has also organised a poetry reading at 5 pm on Saturday in the Village Art Shop for us all. Believe me, it will be fun. Wairarapa poetry gigs always are. 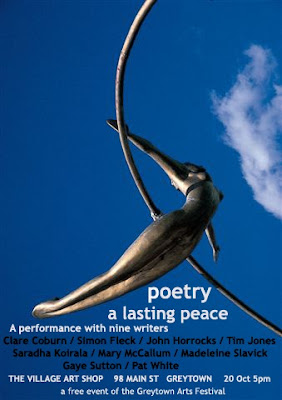 A song this week, not a poem.

"Dance Ti Thy Daddy" or "When the Boat Comes In" is a traditional English folk song, originating in Northumberland - the part of the world where my mother and our friend Eni come from.

Once upon a time she lived nearby, and came in the middle of the night to look after our small sons when our daughter was born. She came to Issy's six-month birthday party, sat in the sunshine in the garden with us and laughed with our plump baby. When she babysat, she brought lollies. The kids loved her.

She's godmother to our middle child Adam; one day when she stood up, he looked up the full length of her and said, 'Eni, why are you so short?' She loved that! Laughed and laughed and told the story many times over. Eni had a great laugh and beautiful skin and was indeed very short. She loved lovely clothes, painting watercolours and going to garage sales.

We knew Eni's daughter, Gillian, first, and then we knew Eni and then when my daughter was born, Eni was there. When Eni moved up the coast to live near my mother, they became friends. So there's a kind of circle here of daughter to mother to daughter to mother. My heart goes out to Eni's family, including her second husband Walter, and to my Mum and Dad who are missing her.

We didn't see her much these recent years, but we knew what Eni was up to, and when we saw her, it was always good. She came to my 50th birthday last year, but sadly didn't get to her godson's 21st this year. She wasn't well enough for that, but she sent a card and some money. She never forgot any of our children's birthdays.

'Dance ti thy daddy' is for Eni and for my mother -- not for what the words say, but for what it is -- a song from the place where they first put their feet. I am compelled now to learn to sing this song too, and accompany it on the ukulele. It's coming along quite well, actually.