Tuesday Poem: Facing up to it

In this city of furrows, we fall over ourselves
tripping down
Devon Street, tipping down
Bolton,
and a return trip at such
an angle that
our foreheads kiss
the pavement.
Some days, it’s not furrowed at all,
rather
a flung thing that’s caught
the wind:
a blanket,
a swag of kelp, newspaper balled
in
a good-sized fist. On
a good day, it is
all dimples,
this city. Ample, it dips
here,
and here, and here -
the harbour  (the smile )
the place we fall
in.
Mary McCallum 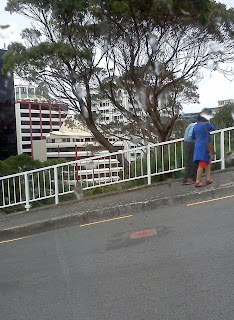 hit the incline of Bolton St.
So Happy Christmas everyone -- and may you have more good days than bad, more smiles than furrows, more poems than not in the coming year. Thank you for coming to visit my blog and the Tuesday Poem blog and I'll be back on deck here in the New Year after a time away at our place in the Wairarapa - a place of flatness and rivers, big sky, sharp blue mountains.
Do please click here for the Tuesday Poem hub and the blissful A Child's Christmas in Wales by Dylan Thomas. In the sidebar there, more festive treats from the wonderful bunch of poets that make up TP - the community that I co-ordinate with the help of Claire Beynon in Dunedin.
Posted by Mary McCallum at 1:08 AM 6 comments

Labels: facing up to it, mary mccallum, tuesday poem

Who by socks - the sequel 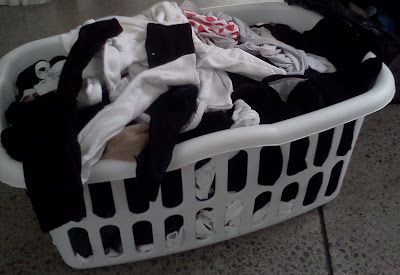 
Visited my friend Mia the day after I posted Jenny Bornholdt's poem Socks for Tuesday Poem. By the back door: the basket of socks waiting to be matched up by her 'willing' daughters, and behind it, a bag of what the family calls 'orphans' - the socks that have lost their other half.

On the kitchen bench, the list of jobs for the family to do and at the top 'Who - Socks?' Which brought to mind Leonard Cohen's 'Who by Fire' song ....


And who by fire, who by water, / who in the sunshine, who in the night time, / who by high ordeal, who by common trial, / who in your merry merry month of may ...


Looking at Mia's basket of needy socks and thinking of the matching basket here at my house, the matching bag of 'orphans', too, and I can't help but wonder - who by socks ?

Posted by Mary McCallum at 9:58 AM 2 comments 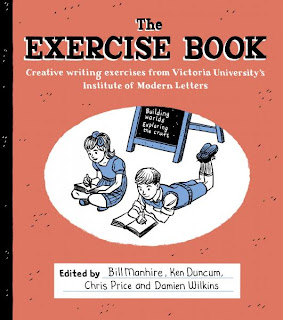 Reviewed this fabulous book on National Radio Wednesday - you can listen to it by clicking on the player above (you need to jig the little dot on the left a little to get it moving for some reason).

Terrific exercises in this book for the beginning writer, for teachers of creative writing courses to plunder, and for established writers who want a pick-me-up. It's been put together by the International Institute of Modern Letters in Wellington to fund their scholarship programme.

I've already used some of the exercises with an adult writing group I'm running locally and had huge success with them - tried a few myself, and been excited by the results. Some of the exercises are old chestnuts, others are brand new, and range from the randomly crazy e.g. Hinemoana Baker's 'Remix Mashup' to get to a poem -- to a careful unlayering of writerly craft e.g. Laurence Fearnley's exercise on writing the Big Scene in a novel.

There are warming up exercises, exercises that 'steal' from other writers, memory prompts, script writing and performance exercises and much more. Something like 60 writers contributed from Baker and Fearnley to David Vann from the US. Highly recommended.

Thursday update: My heart goes out to Radio NZ staff as they mourn the death of their colleague Phil Cottrell murdered in the weekend. While I was doing the book review, Kathryn Ryan was handed the media release about two young men being charged with his murder. You can hear the paper crackling while I'm talking. She was visibly upset as she read it out after the review ended, but being a consummate professional she continued on with the show.
Posted by Mary McCallum at 11:08 AM 0 comments

Socks was published in Mrs Winter's Jump (Godwit 2007) - a beautiful limited edition book to celebrate Jenny Bornholdt's poet laureateship. Two thousand copies were printed and I have book no. 1415.


There are many entrancing poems in this book - Jenny entrances, it's what she does -- but this one had me at 'socks'. They are the musak of my life - there are so many socks in an almost grown family of five: so many to wash, to dry, to roll together in pairs (the 'spares' going into a almost full grocery bag) and to put away. But look, there are two stories inside this poem: the story of common everyday lost socks, and the uncountable story of loss - all loss, universal loss, mine.


It's the leap over the white that keeps the two stories both together and apart. 'Socks' and 'losses' echo each other across the divide - sharing 's' and 'o' sounds, emphasising the bathos, and note how the socks are kept together in a pair (of lines) held together by half rhyme, while 'the losses' are - as one would expect - out on their own. I think this poem is pure genius.

I have a lovely story about it. I was working in the Rona Bookshop one day four years ago, and an elderly woman was brought in by her relatives who left her sitting in a chair while they browsed the books and paintings. I went over and started talking. Turns out the woman was from one of the homes for the elderly. She was right by the poetry section and I asked if she liked poetry. I can't remember if she did or not, to be honest, but she was certainly open to trying one or two.
I found 'Socks' and said, listen to this, and read it to her. She burst out laughing as soon as I'd finished, so loudly - the other people in the shop looked round. She was lit up, transformed. We both agreed it was a magnificent poem about socks and loss, and were still talking about it when the woman's relatives came along and took her quickly off for morning tea or something.
A few days later, I wasn't at the shop and a call came through from a wavery uncertain voice wanting the book about the socks. No-one on deck that day knew which book she was talking about, but they asked which day she'd been in and realised she'd talked to me. I was at home. A phone call later and the book was found and sent off to the home for the elderly with an invoice. Shortly afterwards a cheque arrived with a little note in spidery writing, which I have still, somewhere - about how much the woman loved the book and most especially the socks poem. I've promised it to Jenny, when I find it.
The poem 'Socks' is published with permission. Do go to the Tuesday poem hub to read Lyn Hejinian and the thirty poets in the sidebar.
Posted by Mary McCallum at 12:17 AM 4 comments

I was thirty-three before I learned

people stuck in snow
can die from dehydration.
I would melt icicles
on my tongue for you, resist
the drinking down, drip it
into you. Then repeat, repeat
until my lips were raw.
Continues here...
________________
I have long been a fan of Helen Lehndorf's poems - seeing them on the net and hearing them at poetry readings, and now at last I can own her first collection The Comforter (Seraph Press).
Her publisher Helen Rickerby says, 'This poem, as people at the launches will have heard me say, epitomises what I love so much about Helen's poetry. It is sharp-eyed and specific. It introduces a number of interesting ideas and has more than one thing going on at once. When it talks about life and love, it's authentic and fierce, not clichéd. And it is impossible not to be moved by it.'
Sadly I missed Helen's launch in the weekend, but she reports on it on her blog here. I wrote on this post earlier that Helen's reading at Blondini's in Wellington on Wednesday, when in fact she's not! Got my Helens muddled.

Still, Blondini's (The Embassy Theatre in Campbridge Terrace) at 6pm this Wednesday will be terrific fun with Helen Rickerby, Vana Manasiadis, Stefanie Lash and Emma Barnes . What a feast! And I have to be there this time come what may, I am the MC. Do join us, with these women poets it can only be stimulating and fun.
And to check out more Tuesday poems, visit the Tuesday Poem blog
Posted by Mary McCallum at 12:18 AM 3 comments