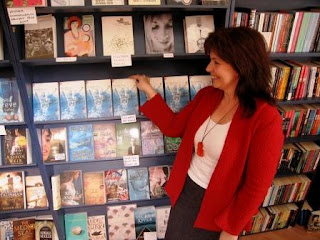 Thanks to Nicola Smith & Bruce Rennie of The Press for this review - the first for The Blue.

Any novel that opens a window on a previously unimagined time and place is hard to put down and New Zealander Mary NcCallum's impressive debut novel, The Blue, achieves this spectacularly.

McCallum's voice is strong and beautifully honed from the first page of this fascinating story of the inter-war world of the small whaling community at Arapawa Island in the Tory Channel, where the wounds of World War 1 are still fresh while the unsuspected horrors of World War 2 loom ominously closer.

The Blue is Lilian Prideaux's story. A war bride and seemingly quintessential New Zealand woman of her era, Lilian is vigorous, hard working and resilient.

But the facade of commonality crumbles all too easily when the return of her troubled son creates fissures in the taut inter-relationships of the islanders.

McCallum captures the smallness of Lilian's world to perfection in prose that is vibrant with life, and deftly juxtaposes her mundane daily existence with the electrifying seasonal slaughter of whales which is the life-blood of the small community.

Like war whaling was men's work in 1938 and yet both powerfully shape Lilian's life; and McCallum's representation of both the trenches and the hunt are unflinching.

Barbaric and enthralling, the three-month whaling season galvanises the entire community, and McCallum skilfully avoids straying into moralist, while starkly revealing how much New Zealand has changed in so short a time.

Moving seamlessly between past and present McCallum gradually reveals the unseen fractures in Lilian's life through the characters of her children, husband and the island community.

The freshness of her prose is remarkable, with descriptions so vivid you can almost taste the salt spray and smell the pine needles underfoot. Her portrayal of the 1930s man is particularly subtle and insightful.

The Blue offers a fascinating insight into a past era and a lost way of life. McCallum's deft and skilful handling of her story produces an original, polished first novel and the promise of a second that will be well worth waiting for.

There's nothing like a first review of a book for an author. The week The Blue was released into the shops last July, my friend Penny rang me from Christchurch to say The Press had a review (yes, the same Penny who rang me to tell me about the Montana shortlisting). She read it over the phone and we both danced for joy.

It was by Nicola Smith and I decided to run it in full on the blog today because there's no obvious web link I can use and it's a nice counterpoint to The Montana excitement - the excitement of the single reader at home with the book.

When I emailed to get Nicola's permission to run the review, she told me she'd only just had a baby when she read The Blue. She said, 'I enjoyed your book so much it distracted me from staring at my new baby for several hours.'A new baby!

I know two people for whom The Blue was the last book they ever read. My dear friend Colin who died aged 83 and my friend Valerie's cousin.Colin didn't finish it. He died peacefully with one more chapter to go. And so the book became one of the bookends of his long and colourful life, like seeing his last seagull, patting his dog for the last time, going to his last play. Who knows which book was his first? It would have been read to him, no doubt, by his elegant mother Zillah who wore long buttoned gloves even in the country. A fairytale, I think.

Anyway, it's nice to know The Blue has been read at both ends of the spectrum. Even if the baby didn't exactly read it, she (he?) couldn't have been closer. (Actually come to think of it, this baby must be nearly one by now, walking perhaps, certainly enjoying books.)

The other serendipitous thing about this perfect first review is that it came out in the South Island which is the home of The Blue.

Photo: Me at Rona Gallery - where I work and The Blue was launched - the week it was released into the shops.

Posted by Mary McCallum at 8:01 AM

What a fabulous review. I'd have blubbed happy tears as well as dancing for joy.