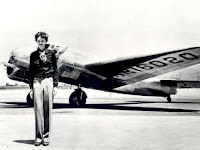 Every day on my google page there is a new picture from NASA. Today it's an astronaut in groovy glasses lying sideways, yesterday it was Amelia Earhart in front of the plane she disappeared in while on a round-the-world flight in 1937. NASA must have been short of photos this week, they appear to have chosen to showcase Earhart because 80 years ago on June 18 Amelia Earhart became the first woman to fly across the Atlantic as a passenger aboard a Fokker tri-motor aircraft. Oh well, I suppose she had to start somewhere. 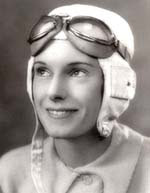 Anyway, it got me to thinking about our own audacious woman aviator, Jean Batten, who like Earhart was a flying celebrity in the 1920s and 30s, with that same astonishing combination of skill, elegance, courage and mystery. When I was researching The Blue I went off into one of those fascinating research tangents that ended in my finding out a lot about Batten, but in the end I couldn't find anywhere in the book to put her. The Blue is set in 1938, so I wanted some reference to the emergence of flight as a form of travel and a step forward into a new technological era, and had hoped to have a mention of Batten's finest hour: her 1936 flight in a monoplane from England to New Zealand.


On October 16 1936, the NZ aviatrix completed her 14, 224 mile solo journey landing on a small grass airstrip at Mangere in front of a crowd of 60,000 people (oh hail the era before television and computers when people had to go out for their entertainment.) Batten's whole trip lasted 11 days 45 minutes and was achieved without a radio using only a map, watch and simple magnetic compass. It was a solo record for 44 years and other records followed.


Even though I couldn't have Batten, I still made flight a thread in The Blue - it recurs through the constant nature of the birds in and around the island, one whaler's thoughts about how one day whales might be shot from the air (which in fact happened), and the point of view of the final whaling scene which shifts from the frenzy of the chase on the water and is given, in part, to an aviator. The chapter begins:


'Riding the squally air above Lookout Hill, for this was a time of flight, remember, of men and women pushing machines to do the unthinkable, would reveal seven men sprawled on the brow of the hill as if they owned the spot. Their bodies would be poised, though, rather than relaxed, their faces concentrated on the sea below, their elbows firm to the grass, the soles of their feet planted hard, so they could push away from it the second the cry went up, and run, down the narrow track and over the swing bridge, to the beach, to the boats and away to open water. The poise was the hunter honed to evidence of his prey; and although they seemed earth-bound, these men, when watched from the sky, they were floating, in fact, half an inch above the grass, buoyed by the seltzer of anticipation, ready to take off.'


Later, after following the hunt at closer quarters, the POV shifts back to the air:


'The picture would be clearer from the air. There'd be the obvious stillness of this slender neck of water known for its turbulence; and then the sharp eye of an aviator would pick out the four white lines drawn on the polished surface. Fast boats. And something else.


From that distance, there'd be no evidence of the misfired harpoon or the man who fired it, and none of the sounds he let loose when he saw what he'd done...'


I loved writing this chapter, it's one of my favourites, the wonders of human flight underscoring the epic nature of the final dramatic whale hunt.


The sadness is that the lives of these women aviators ended so mysteriously: Jane Batten dying alone of a dog bite and buried in a paupers' grave without the world knowing, and Amelia Earhart disappearing, literally, into the air.


All excerpts from The Blue (Penguin 2007) are copyright to Mary McCallum.
Posted by Mary McCallum at 2:22 PM

Hey That Was Great

God bless those Tangents - I always think they are another story trying to burst through, a younger idea sibling if you will. would love to read more about her, love that word aviatrix, I think that is what us writers should call ourselves, sounds so full of high places ( love the photo in the trousers) I have a photo of Aussie female aviatrix's on my desk from same era, ready to welcome Amy Johnson ( US aviatrix?) got to stop typing that word...

Hi Gondal-Girl. Maybe the plural is aviatrices? Don't know for sure but it would make sense. I love the word Aviatrix, too, maybe because it reminds me of Asterix and Obelix and many hours of reading pleasure? Yes, these flying women were certainly audacious sorts.

Re. The Blue in Australia, I know Dymocks in Sydney had it there for a while and even, according to my sister-in-law made it a Summer Read. Penguin Australia put a few out and about.

Quite by accident, just fell (via the internet) upon The Blue in the Paperback Bookshop in Melbourne. Very cool.