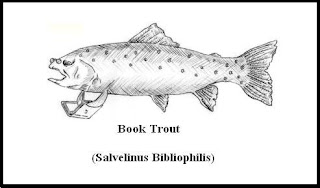 One day a week, I work at Rona Gallery in Eastbourne. It is a bookshop and an art gallery.

The owners Joanna and Richard Ponder are a loquacious couple who love their books and love their art and love their community, and working there is like one long coffee break (Sally, Rhyna, Mick, Wendy, Jane, Alicia, Hana and Paul aren't bad either).


I get a whole day talking nothing but books. Although some days are busier than others at Rona Gallery.

On a good day I get to talk to Rupert aged 11 about how to spend his birthday book vouchers. He can deliver quickfire reviews of the books he's read. One of his current faves is Skulduggery Pleasant. So he buys the sequel, buys the latest Philip Pullman too. Then there's Imogen who wants a boxed set of the Warriors books which are novels about cats with a cast of thousands.
On a Good Day, there's Martin who visits nearly every day and brings his little daughter Maia. He collects first editions in hardback. He covers them in library covers and stores them in a special room in his house. In recent times, he's bought Ondaatje's Divisadero, Gunter Grass's Peeling an Onion and the latest James Bond.
There's Rona who buys books for her busy husband (the last time it was the Junot Diaz), Derek who buys beautiful coffee-table books on NZ to give away at conferences, and the man with red hair who put a few classics on layby once because he'd never read them, and paid off a little bit each week.
And a Good Day will bring in the elderly woman whose head barely comes above the counter, and when asked what she likes to read whispers 'crime.'
But not every day is a Good Day. Cold, wet days are especially grim, but even fine days are a little less busy with the recession biting.

One of my brilliant ideas on a Bad Day before Christmas was A Buck A Book. The books were from out the back, you understand, not the latest releases, but it still nearly caused a riot. One young woman who'd just bought a house and had no money, bought all her Xmas presents for 25 bucks that day. She was so happy. Sadly, it has been discontinued (blame Richard).

So it was lovely to fall, by accident, onto the blog of a bookshop called Old Saratoga Books. It sells used and rare books in the village of Schuylerville, nine miles east of Saratoga Springs NY. The instructions to get there go on forever, but it looks like it would be worth a trip (yes, even from here.) Here's their cat Sam and the logo for their blog is the Book Trout above.
The post that especially caught my eye was one describing 2 days in the life of a bookstore owner --which included a Good Day and a Bad Day. It doesn't sound too different from Eastbourne, Wellington, really. To give you a flavour, the highlight on the good day at Old Saratoga Books was selling some vintage paperbacks which the owner calls Bodacious Beauties. Here's the post.
And here's a recent post of mine with a pic taken at Rona Gallery .
Posted by Mary McCallum at 4:47 PM

Book Trout is such a fab name. I enjoyed your and their postings.

Every now and again, when Hubby has that little conversation about not making any money writing and the necessity to go get a real job, I fantasise about working for the University Book Shop. Getting to breathe in its atmosphere and chat with people about books. Getting staff discount...

Oh yes I forgot to mention the staff discount. It makes that obsessive book buying a little more manageable....