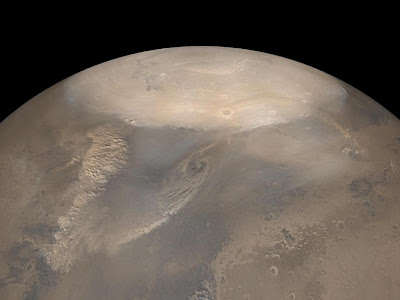 This photo of Mars just in from NASA. I opened up my google home page this morning to find it, and despite having a thousand things to do was distracted for a moment by the thought of spring on Mars as opposed to winter in Wellington. The caption says: 'Early spring typically brings dust storms to northern polar regions of Mars. As the north polar cap begins to thaw, the temperature difference between the cold frost region and recently thawed surface results in swirling winds. The choppy dust clouds of at least three dust storms are visible in this mosaic of images taken by the Mars Global Surveyor spacecraft in 2002. Currently, the Phoenix Mars Lander is exploring the Red Planet's northern region. For Phoenix's latest discoveries, visit www.nasa.gov/phoenix. '

Posted by Mary McCallum at 8:59 AM