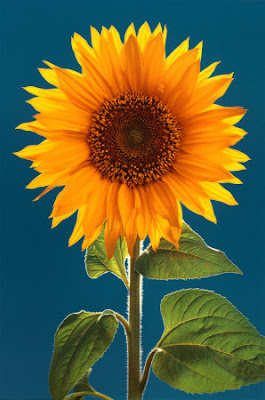 A quick break-out from the tale of the travels of The Blue to talk about an audacious poem rather than a book. It is Andrew Johnston's The Sunflower which is a simply stunning poem. It is about the poet's father who died and the grief he felt, and it uses as its structure a double sestina.

This is the audacious thing about this poem. The sestina is one of those poetic forms which has a defined pattern the poet must meet. There is a certain predictability about it which is like the heart pumping blood through the body so it can do magnificent things, and at the same time each time the repeated word is used its meaning is subtly changed, which seems to me (and apologies for shifting metaphor here) to be like looking into a kaleidescope. The marvel is that the same small beads can - with one small movement of the hand - form so many different and gorgeous shapes.

The sestina is six 6-line stanzas, each stanza with the same end words but in a different order, the final end word in each stanza being repeated at the end of the first line of the next, and the poem ending with all six end-words inside the body of the last stanza. The double sestina is twelve 12-line stanzas each one with the same rearranged end words (and same end sounds, too, so 'sunflower' can become 'hour' and 'her' 'brother'.) The final six-line stanza (ideally) pulls together all 12 end-words. This repetition and subtle shifts in The Sunflower, and the final gathering together of all 12 words at the end, echoes the relentless persistence of grief and it's sister, memory.

Johnston's mastery of the sestina form fills me with wonder. He has drilled to the core of his relationship with his father, and to the core of grief itself in all its hatefulness, meaninglessness, significance and bizarre beauty, and come up with something that will surely become a classic. Here's a taste: 'Death /brings lilies, but someone has sent a sunflower:/this is our penance, staring at the sun,/its blind eye, its ragged halo.'

Andrew Johnston is a New Zealand poet who lives in Paris. On the Best NZ Poems website he comments: ‘The Sunflower is woven from many strands. In 1991 I read John Ashbery’s book-length poem “Flow Chart” and was struck by the double sestina embedded in it (pp. 186-193), which borrows its end-words (among them, 'sunflower') from a poem by Swinburne.

'In January 1997, newly arrived in the depths of a London winter, I was bowled over by an exhibition of Anselm Kiefer’s sunflower paintings. When my father died in 2004, my brother Peter suggested two passages from the King James Bible for the funeral service; their language stayed with me.

'I spent November 2005 at a writer’s residence in the north of France. On a trip back to Paris one weekend, I had a revelation in the train: I could use the double-sestina structure, and even Ashbery’s (and Swinburne’s) end-words, plus bits of the King James psalms and Kiefer’s sunflower image, to write the poem I needed to write about my father (there are echoes of many other sources in there, too). I went back to the Villa Mont-Noir and wrote The Sunflower.'

Read it please.
Posted by Mary McCallum at 5:34 PM

Mary
what a beautifully written post. The double sestina takes some getting ones head around - but I thought your view of how it works as a kaleidoscope very insightful. It's such a long time since I studied poetry and a post like yours inspires me and also teaches me something new. Keep it up.
Alexandra