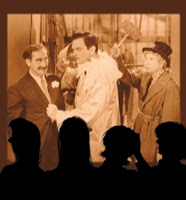 We acted the cliché. We melted with laughter. Not the prickly melt that comes from sitting on a hot stove but the cool relaxing melt, in defiance of chemistry, like dropping deep into a liquid feather bed. We did not know or remember the reason for laughing. There was a film, yes: a dumb sad man with hair like wheat and round eyes like paddling pools; another man with a mustache like a toy hearth brush; and many other people and things—blondes, irate managers, stepladders, whitewash, all the stuff of farce. And there was a darkened opera house growing cardboard trees and shining wooden moons.

I shall never know why we laughed so much. Perhaps other films had been as funny, but this one seemed to contain for us a total laughter, a storehouse of laughter, like a hive where we children, spindly-legged as bees, would forever bring our foragings of fun to mellow and replenish this almost unbelievably collapsing mirth.

Nor was it the kind of laughter that cheats by turning in the end to tears, or by needing reinforcement with imagery. It was, simply, like being thrown on a swing into the sky, and the swing staying there, as in one of those trick pictures we had seen so often and marvelled at—divers leaping back to the springboard, horses racing back to the starting barrier. It was like stepping off the swing and promenading the sky.

After the film, we managed somehow to walk home. The afternoon was ragged with leaves and the dreary, hungry untidiness of a child’s half past four. Faces and streets seemed wet and serious. The hem of sky, undone, hung down dirty and gray.

To read the full story online link here to The New Yorker.

Thanks to Graham Beattie for pointing me to it and Bill for telling Graham. The story is unspeakably good.

LATE NOTE: A discussion on the story on leafsalon has revealed via Janet Frame's niece that Night at the Opera was probably written about 1954. Follow this link to see more.

Posted by Mary McCallum at 8:41 PM

Labels: a night at the opera, janet frame, the new yorker

No one wrote like Janet Frame. You can read half a sentence and know that it is her instantly. I thought she had disappeared from the reading public's consciousness until I saw this story in the New Yorker.
She's unnassuming, not out to please, and luscious at the same time. Who can touch her?