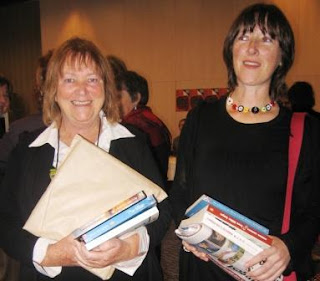 *The enthusiastic crowd including these two audacious festival goers Gael (left) and Mary who came down from Mangawhai, Northland, for the event. They were spotted every day watching the author talks and lining up to get books signed (evidence of only some of their haul in photo). If you look hard enough you will see Gael is holding The Blue. She insists she was planning to buy it before she met me.

*The Blue on a panel with other sea-going books (by authors Joan Druett and Barbara Else), chaired by the colourfully clad, cheerful and efficient Graham Beattie . For more details and photo follow the link to his site.

*Junot Diaz the wildly unpredictable, funny, generous, honest, Pulitzer winner from the Dominican Republic. It took him 11 years to write his novel (when Kim Hill on opening night suggested this was a long time, he said 'that's abuse!') Oscar Wao is a transliteration of Oscar Wilde. The hero is a ghetto nerd living with his Dominican family in New Jersey. And that's just the beginning of what sounds like a wacky ride.


*The Michael King Lecture by brilliant and witty literary biographer Hermione Lee (Virginia Woolf, Edith Wharton), and then a session later with Lee and biographer Simon Montefiore (Young Stalin). Montefiore has a racier approach to the tricky biography genre but the same rigour and wit. Lee noted that she never expected Edith would be on the same stage as Stalin, but then again at another similar event Virginia stood side by side with Hitler. Our own literary biographer Harry Ricketts steered this discussion with his usual gentle aplomb. 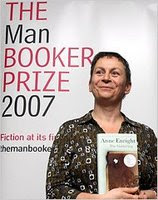 Winner Anne Enright late one night outside our hotel. Just her and me. Later having her sign my copy of The Gathering with a quote from her book: 'I lay them out in nice sentences, all my clean white bones.' I liked her take on Irish literature vs. English: that the latter is about clarity and the former about confusion. And hear this from her mother who used to say: ''Write what you know', then, 'how do you know that?'' (imagine it said with an Irish roll)


*NZ Poet Laureate Michelle Leggott with her pale blue tekoteko who stalked the stage hunting down words and making them squeal and hiss and weep. I wept too, and wasn't the only one, when she read a poem about losing her sight which ended: 'I have fallen out of a clear sky.' Poet Chris Price was Leggott's partner in crime as session chair.


*Hearing writers Shonagh Koea and Peter Wells in conversation -- they are friends and made the audience feel like we were in her pretty house taking tea. The Koea quote that stays with me: when she sees people who look like nothing has gone wrong in their lives and everything has gone right, Koea wants to ask, 'What do you know of dread?'


*Talking to Peter Wells in the hotel lift and the later meeting his proud Mum after a gentle revelatory session about writers and writing led by Kate de Goldi with Wells (Lucky Bastard), Laurence Fearnley (Edwin + Matilda) and Peter Ho Davies (The Welsh Girl).


*Sitting next to Witi Ihimaera at a dinner for Penguin authors which also boasted Maxine Alterio, Duncan Sarkies, Paula Morris, Vanda Symon, Kapka Kassabova, Laurence Fearnley. I am biased but I wonder if any other festival attendees noticed Penguin boss Geoff Walker up the front of every event his authors performed in, grinning from ear to ear?


*Owen Scott on his memoir Deep Beyond the Reef with snippets from Annie Goldson's movie.


*NZ authors Fearnley, Sarkies, Carl Nixon and Louise Wareham Leonard speaking passionately in defence of THE BOOK. Funny moment: a member of the audience asking if any of the panel had used a Kindle, after a pause Nixon said, 'a what?' Good to see Book Council head Noel Murphy taking to the stage as chair.


*Luke Davies, Sarah Hall and Simon Montefiore discussing History and the Novel with Fiona Kidman whose face was a picture when Davies launched into a reading of a mile-high Howard Hughes sex scene.

*The Opening Night which was badly managed by a provocative Kim Hill.


*Nobel prize and double Booker winner J.M. Coetzee who wins no awards for his people skills, and was a thoroughly self-centred and disappointing guest. He refused to answer questions and would only read from his work. At Opening Night he was the last of four authors to speak and he sat so still with his eyes lowered I heard someone behind me say: 'has he died?'

I've probably forgotten something. Astoundingly there was a lot I didn't get to see. You'll have to go elsewhere for that. Graham Beattie's website is a good start. Thanks to other Festival companions: Adina, John, Fiona et al., and to Dave and Angela for putting me up one night.

I hope Gael and Mary got back to Mangawhai okay.

JM Coetzee -- "An interview is not just, as you call it, an 'exchange': it is, nine times out of 10 (this is the 10th case, thank God!), an exchange with a complete stranger, yet a stranger permitted by the conventions of the genre to cross the boundaries of what is proper in conversation between strangers. I don't regard myself as a public figure, a figure in the public domain. I dislike the violation of propriety, to say nothing of the violation of private space, that occurs in the typical interview."

He goes on to say he does not like to surrender control. "Writers are used to being in control of the text and don't resign it easily." He derides the notion that in an interview a writer can suddenly reveal his innermost secrets. "In the transports of unrehearsed speech, the subject utters truths unknown to his waking self ", as he puts it. "To me," writes Coetzee, "truth is related to silence, to reflection, to the practice of writing. Speech is not a fount of truth but a pale and provisional version of writing."

Wearily, he admits to a reputation among journalists as "an evasive, arrogant, unpleasant customer" . Nobody who saw his wonderfully taciturn appearance on Newsnight when he won the Booker for Disgrace, being interrogated by the hapless Kirsty Wark, will have forgotten it. It is rare to see such unyieldingness - such a stone - on television.

Journalists have exacted revenge. After he won the Nobel, a vicious article appeared in the South African Sunday Times claiming to reveal "The secret life of JM Coetzee" (his divorce, the death of his son, a squabble in the University of Cape Town English department, his love of long-distance cycle racing).

Another piece in the same paper called him "a charlatan", denouncing his writing as "lifeless", his vision as "repellent". Coetzee's books are treated as no more than evidence for his own pathology.

Thank you anonymous. Your post is very interesting. I think Coetzee would have been appalled by some of the sessions at the Writers Festival then. It makes you wonder why he agrees to come to such things. I have to say I like the fact that he disconcerts the media who manage to woo the other 99% of us.