True Love behind the Taj 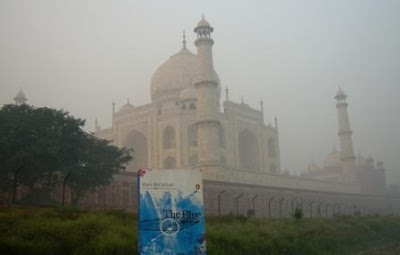 After Greece, The Blue somehow made its way to India and the Taj Mahal. Well, the back of the Taj! Is that audacious or what? Who needs the fountainy-thing at the front when you can get a unique view of the Monument of Love's back fence draped in early morning mist?

Here's what happened -- courtesy of intrepid traveller Mark Penlington who snapped The Blue at the Taj Mahal. He says he's not much of a storyteller but I'll leave you to decide that. The story involves a mad dawn dash, a misfiring tuk-tuk, morning mist, misunderstandings, a missed boatman, and a monk in love.

MARK:
"Having being primed all trip to take a photo of The Blue at the Taj, I arrived there on the Thursday afternoon and realised, in all the excitement, that I had left it in the hotel room. Charmayne and I had a fantastic after 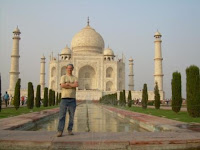 noon there and took zillions of photos, all without the most important feature in them i.e. Mary's book. However we knew that all was not lost. Even though we had already determined to spend as little time in Agra as possible, we planned to visit the Taj twice - once in the afternoon for the sunset and once in the morning for the sunrise. We also knew that the Taj was closed on Fridays (i.e. for our sunrise) but that was no problem as 'the thing to do' is to get shots from across the Yumana river. So the plan was to wake early, book in hand, and get the 'other' famous photo.

The first part of our plan goes well (us waking up at the crack of dawn). I had placed the book and camera at the exit door the night before so I couldn't possibly forget them.

Indians seem to wake up at about 10am and don't seem to go to sleep until 2am. We think that Agra being a major major tourist destinations they will still have tuk-tuks (3-wheeled lawnmowers) at our hotel in the morning, especially as we are on the main hotel strip. But nope, it's deserted. Across the road a (very) young boy excitedly runs to the only tuk-tuk around. First problem overcome.

Second problem is that, if the boy goes to school, they definitely don't teach English there. My Hindi doesn't go as far as being able to say "Take us across the river to see the back of the Taj." My charades of "Taj" "Yumana" "Us" (indicating the other side) don't seem to be anymore comprehensible to him. Two security guards come over and seem to have a reasonable grasp of English and where we want to go. Translations and nods and grunts of understanding are forthcoming. Second problem overcome.

4th problem (or concern) is that I'm sure I'm not pushing the tuk-tuk in the right direction. To get where we want to go involves going back into the city, across the bridge - a trip of about 5kms. I'm sure we are heading away from the city but I assume, being a local, that the boy knows where he is going. As we get closer and closer to the Taj it seems more and more unlikely we are going the right way. He drops us right at the Taj entrance. We protest but he points to a path and says 'under'. Maybe there is a walkway under the river? Unlikely. Assistance again is at hand and a nice young boy in a cycle rickshaw says, yes this is the right way, and he'll cycle us the rest of the way as it is still quite a distance. Excellent.

5th problem - we follow the path and end up at the river behind the Taj but there is no sign of any miraculous underground walkway to the other side where we need to be. And the views from where we are not exactly brilliant. Once again we protest that we aren't where we are supposed to be but at least we can point to our destination. Ah yes, he'll cycle us there no problems. I calculate he would get us there by NYE. But never mind, once again 'assistance' is at hand. There are quite a few people at the banks of the river with us including some officials with guns (not looking very alert) and also a young man about the age of 35 :-). He advises us not to go by cycle rickshaw but to wait as the 'boatman' comes at 7am and ferries people across the other side. He even points to the boat. Charmayne and I agree that this sounds like fun and is preferable to cycling back and trying to find a tuk-tuk and explaining once again where we are going. 5th problem solved.

6th problem - no 'boatman' arrives or looks likely to appear today, the sun is coming up and the views of the Taj aren't great. I take some snaps 'just in case'. we get talking to our new advisor, ask him his name plus if he is a local. No he is from Maharastra. I ask him why he is in Agra and he says he was actually a monk but was asked to leave the monastry. He became a doctor and is in Agra because he had to meet the father and brother of the the woman he wants to marry. He has known her for 9 years but her father didn't know of his existence until now. He says the meeting went well but there are problems as the 'organisations' oppose their marriage. You can tell he's anxious and a little despondent. I mention it is auspicious that he's at the greatest monument to love.

As we are about to cut our losses and head back to the hotel for breakfast, word arrives that there's a brilliant viewing spot of the Taj through the bushes and up on a hill. We, Charmayne and I, the Doctor and the Cycle Rickshaw boy, head into the bushes. As the bushes get thicker and thicker the view of the Taj gets less and less, as does the likelihood of us coming across a hill with an excellent view. After about 10 minutes of forlornly crashing through the bushes we decide that it ain't going to happen so we make an exit stage left. The Rickshaw boy cycles us back to the hotel from which another story begins but we won't go there.

And that's India in a nut-shell really. Every time you plan to do something, you end up being kidnapped and do something completely unexpected. And the journey's just as much fun as the destination, as long as you take things as they come. We might not have got to go where we wanted to go and missed our only chance to get 'the other famous shot of the Taj' but we both thoroughly enjoyed the whole episode of meeting the Monk turned Doctor who was at the greatest monument to love to seek permission to marry his loved one. He was such a nice guy. Shame his promise of the boatman didn't eventuate though.

What a tale. Thank you Mark! And Charmayne. And Noeline, Mark's mum, for giving him The Blue and suggesting he take it with him.
Posted by Mary McCallum at 7:47 PM