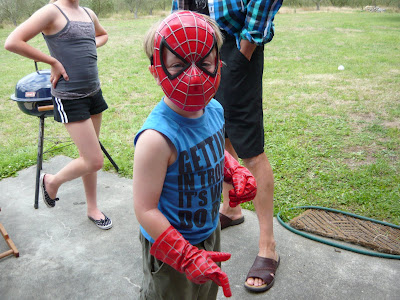 One Sunday in February I went for a walk with my lovely friend, Alexandra, and her son Ned aged five (pictured). It was a sunny day and we walked down from their house into a small and leafy valley. Every now and then, Sandra would pause and point out something she wanted to show me: a kowhai seedling beside a painted stake; a hillside dense with native shrubs; a young rimu with its narrow sloping branches.
From looking at the path, listening to Ned's chatter, talking about something or other, I had to pause. What Sandra was pointing at came into focus and was framed. I saw it when before I hadn't, and what's more I saw it with her eyes. It grew as I watched it. An ordinary section of bush or a shrub or a seedling took shape, beckoned, became meaningful. Was named.
It struck me all of a sudden that this is what a writer does when she writes a story.
Another revelation came when Ned said, 'I'm going the quickest way' and rushed off to take a short-cut just like the six-year-old Billy in The Blue. I stole the phrase from a six-year-old boy who walked with me on Arapawa Island when I was researching the novel five years ago, but haven't heard it since. Ned's spitting out the exact same words in the same circumstances as a child of my invention was one of those meta-fictional moments which disoriented me briefly.
Of course, the truth is small boys the world over (and whatever era) are black and white, and absolute. So macho and yet so deliciously children. It has to be the quickest way and not merely the quicker way. And I am thrilled to think that Billy - after 18 months or so inside the pages of my book - is still acting the way a real boy should.
Posted by Mary McCallum at 6:25 PM

Labels: alexandra, ned, the art of the novelist, the blue, Trelissick Park, walking

What a great post! A lovely analogy for writing and a meta-fictional moment. Very cool.