The Blue in Washington 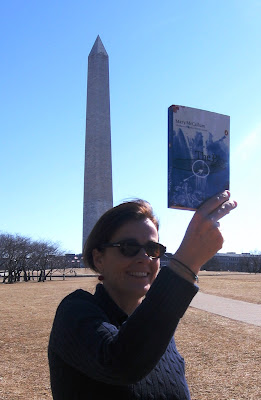 Here's The Blue by the Washington Memorial, held in position by my friend Laura who lives in Washington DC, and who is connected to the writing of the novel because she was my Italian expert. My lovely character Gunner is of Italian descent and utters the odd phrase learnt from his father - alla fine del mondo being one - and Laura was happy to check them for me.

She, her husband Leo and family left Italy thirteen years ago to live in NZ before shooting through to jobs in DC. In the four years they were here, our two families became great friends. Our children were similar ages, Laura and I had our third babies close together, we all loved good espresso coffee and Laura's pasta. And while we finished off bottles of red wine, the children played dress-ups, ran wild in the garden and cooked pancakes wearing roller blades (the children not the pancakes!)

We had Christmasses and birthdays together, my family learnt some Italian, the Italians learnt Kiwi, I learnt to cook a risotto - Laura an apple crumble, the men tramped the Tararuas (sounds all very 1950s really...maybe it was), we buried two placentas and planted a pohutukawa together (nope, that's definitely 1990s, given our whakapapa.)
Salad days.
It was hard when the Italians left NZ. Although they have visited us, we haven't - until now - managed to get over there to visit them. It was so good to see their home in Georgetown and get a feel for life beside the Potomac.
Every now and then people send me a photograph of The Blue in some exotic spot around the world and I put it up here. It started with a friend visiting Greece and blossomed to include Antarctica, India, and Qatar. The links to these photos and their accompanying stories are down the right hand side of my blog.
Anyway, there I was visiting exotic spots in Canada and the US last month with not one but three copies of The Blue in my suitcase (for gifts, random publishers I might meet on the train, exotic photos), and somehow I managed to forget to take any one of them plus camera to all of the key landmarks on route - the frozen St Lawrence, the world's biggest skating rink in Ottawa, the Empire State Building, the Statue of Liberty, the White House ...
Finally, in DC on our way to the airport I grabbed a minute in front of the Washington Monument. I wanted the White House but there was a road block and lots of traffic, so I had to plump for the Monument instead. Only a day before, the grass around this giant needle had been covered with ice and the hill had looked like something on another planet, in fact it was icy all the way down the Mall to the Capitol; but on the day of the photo the weather was milder, the grass bare and brown.

My daughter and I had walked the Mall two days before when it was crisp and icy, Issy crunching in her chucks while I strode beside her on the asphalt and tried to imagine the two million people who'd stood on its 1.8 kilometre length that month to watch Obama's inauguration.

As we approached the Capitol, bells at a church somewhere started to ring out America the Beautiful and behind us the sunset glowed rosy pink and that pure stretch of ice shone pink too. A few people walked by on their way home from jobs as government officials or staff at museums but mostly there was no-one - just us - the bells tolling, the ice shining, famous monuments standing at ease as if they were any old monuments in any old town. It was surreal. 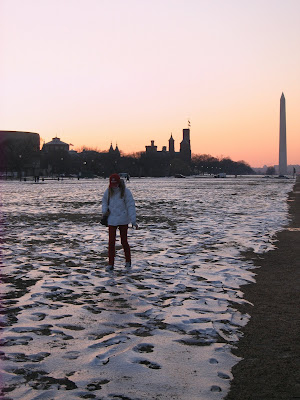 Speaking of monuments, I was not as taken with the triumphal Neo-Roman monuments as I thought I'd be, and even the Greek-style doric columns of the Lincoln Memorial seemed too much to my eye - too huge for a start, and housing a massive 19-foot figure of Lincoln who is rendered godlike by his size and weight. See the man, it says, triumphant Man. 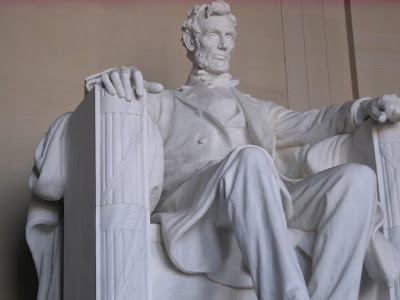 I prefered the Vietnam Veteran's Memorial nearby. A wedge of polished black granite below the level of the earth, it struck me as eloquent and authentic, and a living monument where people still go to trace their relatives' names, where names are added and changed, where history is still working its way out, and more than anything where Man is not triumphant nor is he the centre of things.
Rather, he is one of many thousands of names, the depth of half a thumb, one beside the other. Small, easily lost, forgotten, found again if lucky. A cross (missing in action) to a diamond (dead). Ordered to march the march by the same country that adores the giant marble statue and the doric column, the super-sized burger, the multi-millionaire child celebrity, the President as super-star. 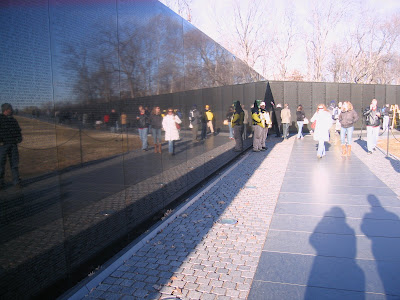 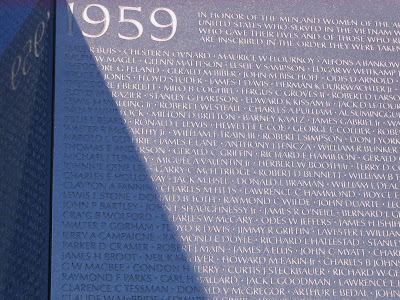 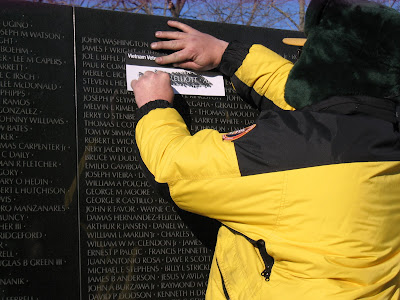 But perhaps there's a new order now.
Scott from Long Island was watching Issy and me take photos of each other in front of the White House on our first day in DC. Scott is a black man with a gentle, considered way of talking, and he was there to pay tribute to the newest President of the United States. 'For the first time there is someone in the White House who thinks like I do and acts like I do,' he said. 'He looks at home on the basketball court and in the Supreme Court.'
Scott seemed very happy about having an ordinary-sized man in that big white house. We looked through that fence together hoping to catch sight of him jogging or something, but all we saw were squirrels. When Issy and I left, Scott was still standing there looking thoughtful. 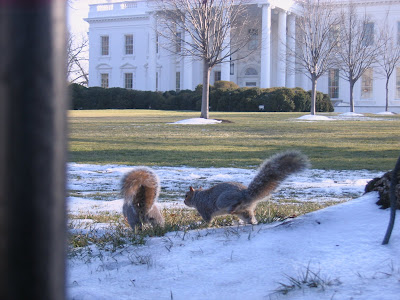 Posted by Mary McCallum at 1:03 PM