Water falling in the Golan Heights 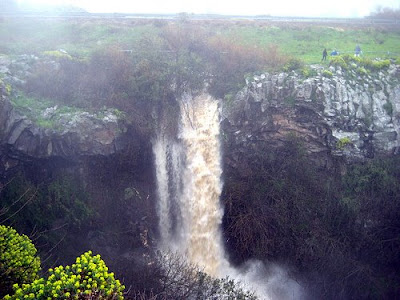 Waterfall in the Golan Heights. Photo: Sharon Greenberg from Flickr: [some rights reserved]

Yesterday, it seemed everyone I heard from via email, facebook and blogs was talking about the weather. Hadas Matas who is the translation editor for The Blue in Israel is so relaxed after weeks of chasing me up over translation points, PR material etc for the book that she emailed to tell me there was snow on Mount Hermon. The family got up at the crack of dawn one day and drove for hours to see it. They live near Tel Aviv and Mount Hermon (Israel's tallest mountain) is in the Golan Heights in the north. The children were freezing but Hadas says the trip was worth it.

On the way, they saw the waterfall above. Hadas' husband, Sharon, is the photographer and my Israeli publisher. He's posted some beautiful photographs of the area if you press his name and follow the link.

My brother-in-law in Canada was also talking about snow - this time on Facebook. Mind you it's less of a thrill for Alastair because there's snow in his part of the world for five months of the year. He was heading up to Mont Tremblant in Quebec today to ski with his son Nicky, and it was expected to be minus 33 with the wind chill. I bet they have a wonderful time. Although, Alastair is definitely looking forward to spring and not just for the obvious reasons. He lost his car keys on Tremblant when I was visiting in February - they've told him they might turn up.... in spring.

And two friends in Melbourne reported on Facebook that there is rain over there at last. Andy lives outside the city in a rural area that, he says, hasn't seen rain since December 12. Jennifer - the poet - who is similarly rural in outlook, says poetically, 'it's raining like a bastard! Hooray!'

Long may it last.

In Wellington, today it's sunny and hot with a light breeze. Not a cloud in the sky. Just how we like it.

P.S. After I wrote this post, I went for a walk with the dog by the sea. The first person I saw was a woman with small twins in a buggy - I called over: 'Lovely day!' To which she replied, 'It's too hot.' I wonder if she'd rather be up Mount Hermon .... Anyway, this is the view from our house and the beach I walked on with Ruby. Pretty nice I think. 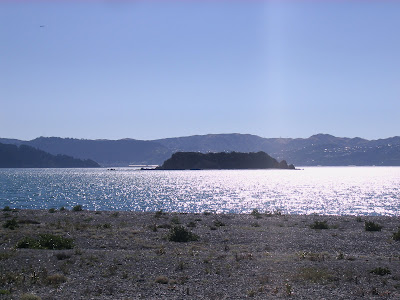 Posted by Mary McCallum at 1:51 PM

Oh what a pretty day you had! Ours was very like that in Dunedin, just lovely.

Wellington and Dunedin are not renowned for such weather so I don't feel guilty despite all the dramatic news from elsewhere.

You're right PC! Absolutely. In the evening Issy and I went down for a swim and we stayed in the water floating and chatting for ages. Bliss. [Thrilled to read about your oysters...I adore them.]