Persecuted by ideas - the inner life of Elizabeth Knox 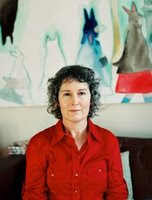 immed and am now reading page by page Elizabeth Knox's wonderful collection of essays The Love School: Personal Essays. I am a terrible skimmer of non-fiction, especially exciting non-fiction. But I really must settle and read it properly because everything I've caught sight of so far has been the stuff that David Larsen describes as making 'the world tilt'. It is truly a fascinating insight into the mind of one of this country's most imaginative and successful writers and Larsen's review does it justice.

Rather than try and replicate that, here are some of the bits and pieces I've collected on Elizabeth Knox over the past few months, planning at some stage to post something on her on O Audacious Book. As happens, I still have the notes scrawled in red ink in one of my moleskine notebooks, and a tatty old review or two and nothing more substantial. So rather than dally any longer, here they are ...

*
Most of the notes were scrawled down when I heard Elizabeth Knox speak at the NZ Post National Schools Writing Festival at Victoria University in August. She was her usual frank self - talking deeply and absorbingly about why she writes and what she writes. One student asked her where she got all her ideas from and she said: 'I'm persecuted by ideas, I know what I'm going to write for the next ten years.'
On what to write about: 'I wait for something that is so exciting it's driving me crazy. I have a lot of ideas but I don't always know which end to start it from.'
To other writers: 'Take what really blows up your skirt and take an angle on it - something you haven't thought about before.' And 'every idea is a whole lot of ideas bundled up together.'

On the physicality of finishing the Dreamhunter books: 'The matrix of the whole story was falling out of my head and my brain was unravelling. It was physical. A very strange feeling.'
On her new novel The Angel's Cut - the 'sequel to The Vintner's Luck' due out soon: 'Xas is so pleased with himself and so powerful and so ruined at the end (of TVL). And you start with the ruined Xas in The Angel's Cut.'
Knox says she was preoccupied with flight in The Angel's Cut. 'Xas lost his wings in Vintner's Luck. He's very small and thinks he's an insignificant (? or maybe she said 'significant'?) angel. He's been wandering the earth since he lost his love Sobran.... He's been back in the air including on a zeppelin in WWI in an airshow in France...'
On the the negative reaction to Black Oxen: 'I was walking down the street and I thought 'I don't want anyone to look at me.''
*
I have kept a Listener review of The Vintner's Luck when it came out ten years ago (it has been stunningly re-issued to celebrate its tenth anniversary). The review is by writer Peter Wells and reminds me of the excitement so many people felt on reading Vintner's Luck all those years ago and continue to feel, and the excitement many of us have felt ever since when we see Knox's name on another new novel.

The truth is, you never know what to expect when you open that fresh shiny cover, but you do know it'll be a ride to remember. Appositely, at the school writing festival this year, Knox read a scene from The Angel's Cut which described Xas on a rollercoaster in the US. It was sensational. Literally. I barely wrote a word I was so taken up with experiencing the physical sensation of that ride. I did record a single quote that has no context but clearly stunned me at the time: 'left that person's hungry skin.'

Reading The Vintner's Luck, I was reminded of why we read. We read to evade the weight of time ('Despair is gravity' - Elizabeth Knox.) We read also to experience the pleasure, almost unseen, of a beautiful construction, an airy theorem that exists only in words on the page and inside our heads. We read also to forget who or where we are. As Elizabeth Knox says, 'Books can be the people we never get to meet, ancestors or neighbours.'

Posted by Mary McCallum at 3:46 PM

It was such a pleasure to listen to Elizabeth in conversation with her sister Sara at the Christchurch Writers festival.

I've ordered The Love School from UBS and can't wait for it to arrive - some summer holiday reading to look forward to.

Thanks for the heads up on The Angel's Cut. I loved The Vintner's Luck and had no idea there was a sequel coming out.

Knox has come a long way since her first novel, The Z Hour, which I have a copy of in my library. I found that book quite clunky (I've got to stop using these literary terms) and it almost put me off her, then I met Xas, and the full force of an eccentric, beautiful imagination transferred expertly to ink, and have been hankering to read more.

Better yet, I've just been reading Bookman Beattie, and The Vintner's Luck is coming out on movie over 2009.

That will be a fascinating movie, if done correctly. I hope it's been made for an adult audience. If anyone has links to the movie, I'd love to have them.

Beattie's link above is a great one too.

I read The Love School by Elizabeth Knox, Its very good book, I really enjoy reading this book.