how to be above reproach 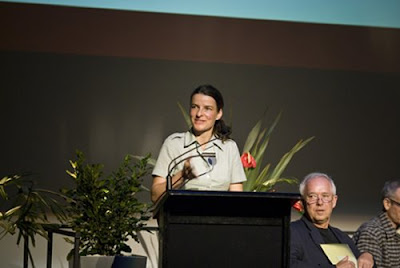 Talented essayist Anna Sanderson has just won one of the Arts Foundation’s ‘New Generation’ Awards donated by the Freemasons and worth a gob-smacking $25,000.

Here she is speaking as one of the writers shortlisted for the Modern Letters Prize this year. Next to her is Bill Manhire and, beside him, the ear of the winner, David Beach.
I am thrilled for Anna who was in my MA class at the International Institute of Modern Letters in 2005. A quietly-spoken classmate with a background in photography and art writing, everything she said was astute and worth listening to. I think all nine of the rest of us made note of Anna's comments on our work and vowed to be better next time.

The essays she was working on, which became her MA thesis and eventually her book, Brainpark, astonished all of us with their insight, singularity and power. The other thing we had to grasp in a hurry was that Anna wasn't out to impress anyone, she just wrote as she wrote, and that meant she provoked and unsettled people and left them feeling plain uncomfortable sometimes.
The other astonishing thing was Anna found herself unexpectedly pregnant near the start of the year and still managed to have her baby, get back to class, complete her thesis and win one of the IIML prizes.
Anna's publisher Victoria University Press says 'Brainpark is a wholly convincing experiment in the essay form. A core theme of disassociation of feeling and aesthetic effect is explored in a number of contexts – family, faith, art history, sanctuary.'
Anna does all this with intellectual playfulness, literary surefootedness and self-effacing honesty. Writer Ian Wedde picked Anna's book as one of his finds of the year and said it is 'an engrossing read, a critically astute piece of writing and a mature accomplishment. Brainpark sets a new standard for the personal essay in New Zealand.' Anna went on to win the prestigious Landfall Essay Competition in 2006.
Looking thr

ough my MA reading journal (titled 'The Incredible Shrinking Novel') I realise how often Anna gave me small gifts about the art of writing that I stored away and have fallen back on many times since. The one I remember most clearly was an epiphany about the use of precise description to reveal a sudden startling insight into character. What someone once referred to as describing the coffin not the grief. Here's what I wrote back then:

I've just read Anna's description of her father cutting her nails. She has an ambivalent relationship with him but Anna doesn’t say that, she talks about how he cut the nails – pure and simple.

She’s 19, he holds the nails tightly but still there’s a 'doddery imprecision', he has high quality Swedish nail scissors. He seems controlling, perfectionist, cold, detached. She never uses those words. It is a triumph this paragraph.

I have learnt a lot from Anna’s strange, prickly, clever essays especially her character studies. I enjoyed too an apposite quote she included from Ingmar Bergman regarding how art lost its way when it became separate from worship.

Early on in class, Anna made clear her approach to writing and she never veered from it. Even if at times we felt uncomfortable in its glare. Here's the reading journal again - this time we'd just finished a poetry exercise.

Approaching the poem, I was determined to be more honest in my writing – this came fresh off the back of Anna’s startling honesty last week in her False Starts assignment. The statement that resonated for all of us was: I want to be above reproach. This referred to how her work was viewed by the class.

It struck me then how engaging honesty is in writing, just as it is in people we meet. It has a nice way of making the reader complicit with the author: ‘look here’s a secret.’ I realise I was far more open when I was first writing years ago, but have learnt over the years to make more use of, what Bill Manhire calls, a ‘foliage of words.’ Maybe there’s more to protect as one gets older.

Later on in the year, Anna returned to this theme.

Regarding poetry being ‘complicated’, Anna pointed out sometimes we are sated with indirectness and implication and need something more concrete, and to explore bigger issues head on. [Later note: there is some irony in this as in a matter of days Anna will have her baby.]

On the day of the Brainpark book launch, Anna arrived with her partner and her baby and said she had been shaking all day with the thought of what she had written going out into the world. She stood up to speak without an apparent tremor, and was grinning from ear to ear signing books afterwards.
I have deep respect for Anna and her courage and skill as a writer and I am immensely grateful for what she taught me the year of my MA which is when I whittled a flabby manuscript of The Blue down to size, and made it into a novel.

There were a lot of wonderful people saying 'drink me' that year, but Anna's voice was one of the most compelling. The $25,000 prize couldn't have fallen on more fertile or deserving ground. At last, this supremely talented writer can afford to give herself a small break from her babies (there are two now) and get back to prodding those dark corners again to give us all a little more light.

Dad would stand on my right-hand side with his quality Swedish nail scissors, and hold each finger quite tightly as he cut it. He had a slightly doddery imprecision. He would purse his lips in concentration, and then run his thumb over the newly cut edge as if to feel for burrs or rough spots after each nail had been cut. The nails would drop down two storeys to the concrete below.