The Blue in Japan 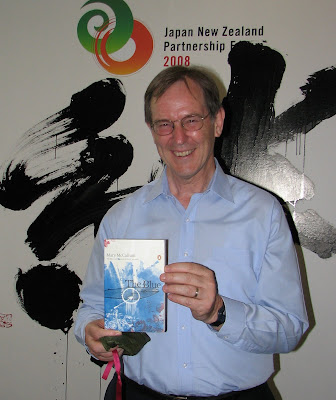 His Excellency Ian Kennedy, NZ Ambassador to Japan, with his signed copy of The Blue. A nice irony here as The Blue is about NZ whaling and NZ was pivotal in the International Whaling Commission establishing itself as an anti-whaling organisation against the wishes of the Japanese.

I know this because my father-in-law, Ian Stewart, was New Zealand's Whaling Commissioner and Chair of the IWC in the 1980s. I visited him at the annual conference in the UK in 1985 and remember the Japanese fury at the NZ position.

It was then I started to become interested in whales and whale conservation and the history of whaling. I reported what was happening at the IWC conference that year for Radio NZ, and went on to report on the work of the Commission when I returned to NZ and worked for TVNZ's Eyewitness current affairs programme.

I remember the IWC met in Auckland in 1988 and I went up to cover it. I also remember looking for whaling footage for the story and being fascinated by the astonishing shots of whales cavorting in the ocean and looking after their young.

I had fallen upon the name Perano while I was at university in the early 80s and tucked it away (without realising) for future use. This was the family of Italian descent that began modern Tory Channel whaling which is the stuff of The Blue. Put that together with what I discovered about whales via my father-in-law, not least the passion people feel about them, and you have the curling tendrils of thought that led to my novel.

Thanks to Anna, Martin and Humphrey who sent me the photo of Ian Kennedy taken earlier this year after giving him a copy of The Blue. Anna's a second cousin to my father-in-law and her son Humphrey is living in Japan for a while.
Posted by Mary McCallum at 10:02 PM