The First Touch of Light 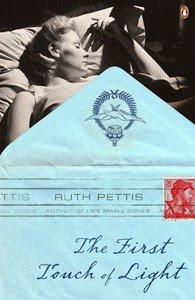 A bitter-sweet review to deliver on Radio NZ's Nine to Noon show this morning. In front of me was Ruth Pettis' highly accomplished novel The First Touch of Light [Penguin 2009]. Ruth Pettis is the pen-name for Dianne Pettis who died last year aged 53. Her first novel Like Small Bones was shortlisted for a Commonwealth Prize and readers who loved it have been waiting for her second novel, and now here it is - also, regrettably, her last.
I met Dianne twice in Wellington four years ago when she was studying fiction and poetry at the International Institute of Modern Letters. She impressed me with her sensitive and poetic approach to writing fiction, and her determination to learn as much as she could about it and to keep writing despite a diagnosis of cancer. I was wrestling with The Blue at the time and made sure I read the perfectly-formed Like Small Bones.

Dianne went back to live in Dunedin shortly after that and, like me, became a book reviewer for the Nine to Noon show. I was stoked when she was slated to review The Blue in 2007 because I knew by then she had a very fine understanding of what made a book tick. It was one of the best reviews I had, and certainly the one delivered with the most passion. The only thing was, Dianne was very sick even then and her voice was terribly strained - almost at a whisper. She'd worried she wouldn't be able to do the review, but she did it, over the phone propped up in bed, straining to get the lovely words out. I am forever grateful to her for that.
So here now: The First Touch of Light. The full review can be heard here.
In brief: It's 1940 and George enlists to go and fight in North Africa and Italy in WWII. First he marries Ellen and this is the small misstep on which a tragedy unfolds. George is traumatised by the war - written in superb detail by Pettis - and doesn't write home. Ellen suffers from this and the four years he's away devastates their relationship. Ten years on Ellen leaves George. Fifty years on, the daughter Beth goes to Italy to see where George spent the war and try to understand him better. The novel is about the terrible tensions in a marriage and inside an ordinary man, and the extraordinary circumstances that caused them. There are three voices: George, Ellen and Beth's, and the reader moves seamlessly between them and the three different times.
[It strikes me that the key themes in The First Touch of Light are shared with The Blue, except the stressor is a different, earlier war. And in fact, there is a growing body of NZ fiction that explores the business of war and its broader impact on people in this country. Patricia Grace's Tu is another one.]

Pettis' writing in the novel is sublime; from the first word you know you are in accomplished hands. Every word is purposeful, polished, translucent. Dianne loved a line in The Blue about words being let loose from their moorings. No wonder, as this is exactly what she does. She writes exquisitely about the quotidian detail of Ellen's and George's lives, and she also writes the big tragic themes of love, death, war, loss and grief with such freshness that you feel strangely consoled. But oh! it's a sad ending. How I wish there'd been a little light, just a little. On the other hand, I think often on the simple and exquisite nature of those final words.
Posted by Mary McCallum at 4:05 PM

Oh dear, what a sad story. It's too bad she couldn't live to see her second book published. You wrote a lovely tribute.

What a moving story of war and grief and loss, and a compelling portrait of a marriage under impossible stress.