And how to write in the midst of things 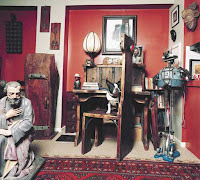 Nicola Barker's writing desk, according to The Guardian's Writers' Rooms series, isn't in a study at all but in the corner of the living room. It's a beautiful wooden piece surrounded by an idiosyncratic collection of things.

She says: 'I got the carpenter who made it to cut a small indentation into the table part, so I could slot right into it. It's made from some old stairs. And it has loads of little cupboards in front full of interesting stuff - letters and rosary beads, faulty discs, stickers and whatnot. As I work, my dog, Watson, insists on positioning himself under my chair. '


I'm interested in Barker's work space because a) I haven't read but am drawn to her 800-plus page novel Darkmans which is a subversive take on what language is and does (I gather) and debates amongst other things the "absurd idea that language has these gaps in it and that lives can somehow just tumble through", and b) I wrote The Blue in the midst of things on an old kitchen table in the corner of the family room accompanied by a piano, 2 guitars, a stack of old board games, a wooden castle, a noticeboard, a filing cabinet and the dog's bed. All pretty tidy but all very much there.


I partly did that to ensure I wrote only in school hours (and in the middle of the night) and fled back to daily life when the children came in the door. Now they're older there's a little less pressure to do that, so I've turned the upstairs spare room into a 'study' for this second novel, but it's not as appealing (less cosy I suppose, and the office chair is rubbish.)


It becomes more appealing when the kids are all home, the electric guitar is getting a work out, Youtube is bleating hip hop, the Sims are doing their thing on the PS2 and the dog needs a walk.... Then I might just trot up those stairs, pull on my 'Colin' cardigan (it belonged to a late friend and helps me write) and close the door.


Or I might take the dog for a walk.


It would be interesting to hear about other NZ writers' rooms. Rachael King admits to working best when things are higgledy-piggledy.

And see the previous post about Virginia Woolf's solitary writing splendour in the 'writing lodge'. Still sounds like she could have done with those ear muffs.
Posted by Mary McCallum at 9:37 PM

I let out a little squeak when I saw this desk of Nicola Barker's, I must have missed it first time around on The Guardian website, how gorgeous is that...

When I read that Virgina was constantly distracted, I thought that was a good thing to my mind, as sometimes for myself ( I can't speak about anyone else) too much sanctity and quiet makes for some blank staring for me.

My desk is where I google, research and type up as well as work on things in detail. But all first drafts, out in the real bustle of the world... So I was glad to read that you wrote your novel at the kitchen table, nice to think of a novel as the stuff of life

I have two writing spaces, the summer one and the winter one.

The summer one is a kind of a sun lounge/ office that Hubby and I share. It's loaded with books and papers and stuff I can't find a home for, and my walls are covered with pictures related to the current novel, cards and postcards from friends, artwork made by the kiddies and post-it notes of the things I should be doing, but frequently forget. My writing is accompanied by the sound of my snoring cat. This room turns into a fridge in winter.

In winter, the cat and I move to the dining room table, in the living area with the heat pump! I generally have to shove aside the various newspapers, kids artworks in progress and assortment of cornflakes and other food crumbs to find a space for the laptop. The down side to this is it's closer to the kettle and the pantry...

Hmm, interesting, Vanda. Sounds like you write very much in the midst of things too!

What about draping that snoring cat of yours around your shoulders like that nice English writer we looked at recently and you wouldn't have to move office in the winter?

Oh and thanks, too, Gondal-girl. Yes, I sometimes wonder how the distractions work. Monkish silence could be a bit of a dampener on the creative process. Shifting writing possie at different stages is not a bad idea.

On the other hand, I'm thinking: industrial earmuffs plus shoulder-hugging cat plus exotic desk made of stairs... plus husband who dashes in at odd moments crying out: 'this novel is a masterpiece.'