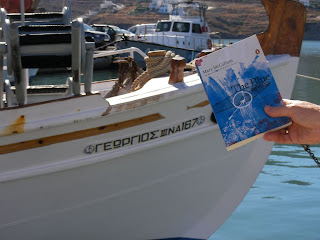 Since The Blue was published in July last year it has travelled the world. That's the way of a books I suppose. They can slip into suitcases, bags and pockets. They're fairly compact and unlikely to set off alarms. Forced to share space with a make-up bag, three moleskine notebooks, a pen, a camera, an ipod, a cellphone, an unpaid parking fine, and a hairbrush, a book will squeeze its pages together, loosen its binding and hunker down.

The first photograph of The Blue away from home was taken on Andros, Greece, shortly after publication. The fishing boat looks like it's called George. Sue and John took the snap and sent it to me (he's a doctor, a Shakespearean actor and a tango dancer, and she's one of the best midwives in the world and a tango dancer). I was delighted. I was seriously jealous. I could smell the sea, see the pelican, hear the Greeks: Ti kanees simera? Eise trelos?

My father is part Greek, you see, and my Yiayia (grandmother) and Aunts Mary and Chryssoulla lived there. Dad left from Pireaus as a WWII refugee with his family at the age of six. Another boat leaving at the same time was bombed. There was nothing for him to eat but triangles of processed cheese. They went to Egypt, then South Africa and eventually England. Yiayia and his sisters returned to live, Dad didn't. He visited, though, and once when I was there. We went to Delphi with Chrys. We stood in rare air, amongst ancient stones, and breathed in the muses. At the Greek Easter celebrations, we walked home in the dark with our candles and made a smoky cross above the door for luck.

My husband Ian and I lived in Athens for nine months. It was over twenty years ago and we weren't married yet. We stayed with Chrys in her small apartment on Argolidos Street, drinking cafethaki, smoking Karelia Lights, breathing in the diesel rising from the streams of traffic below, watching our clothes drying on the balcony and playing Beriba (cards). We ventured out into the markets with the leafy oranges piled on tables, we passed the butchers with the whole carcasses of lamb, we breathed diesel fumes, we sat on buses to the sound of old men clicking kobboloi (worry beads), we drank wine that tasted of resin and chicken that tasted of fish, we bought koulouria in Syndagma Square and ate outside in the Plaka, when Yiayia hurt her hip we gave blood so the doctors would operate and took small fried fish into the hospital for her to eat.

We worked -- I taught English to small children whose parents sold fur coats and Ian held conversation classes with DHL couriers. We drove to Delphi, we skied down Mount Parnassus, we went to Olympia via Sparta, and took a boat to Mykonos and Santorini and Rhodes. We rode a donkey on a cliff edge, stayed in a white-plastered house high above the Aegean, saw dancing bears, swam naked in a turquoise sea, stood amongst ruins and poppies and in the cool of Orthodox churches. My friend Sandra came over and the three of us went to Crete. We rode bikes and fended off Greek men who wanted to even the numbers. We went to Rethymnon where Yiayia's family came from. Later, she told us her family actually came from a little village outside Rethymnon which we never got to.

Another time, Ian and I crossed the border to Turkey where we went to the library at Ephesus, spent New Year underground at Urgup, and swam in water the deepest inkiest blue. All the songs there were about love and involved clapping. Tea was in glasses with sugar lumps. We saw the Agia Sofia and the Black Sea. On the way back to Athens I had food poisoning and the bus crashed. Nobody was hurt. In the still night, by the side of the empty road, just across from what appeared to be a chasm, beside a roadside altar, we stood in silence crossing ourselves and considering our good luck. Until one of the German tourists farted. And it wasn't any old fart. It was a bounce-off-the-mountains, echo-to-the-bottom-of-the-chasm sort of fart. Everybody -- Greeks, French, English, Germans, Turks, tourists, businessmen, drug dealers, families -- laughed and laughed. And then I was sick, all the way to Thessaloniki.

John and Sue didn't know any of this when they sent the photo. And now they've started something. I have over a dozen photos of The Blue's travels which I'll post in coming weeks sent by people I know and people I don't. India, the Middle East, and the US are just some of the backdrops. And there are stories to go with each of them. I promised a prize for the 'best photo', so I will deliver on that. I'm not sure how to judge it but I'll work something out.
Posted by Mary McCallum at 11:21 PM

Welcome to the blogosphere Mary!

Begad, I never realised you were part Greek. More reason to keep reading...

What a gorgeous blog, Mary! I shall become a convert yet. Life sounds splendid - an olive grove!- and I shall buy the book tomorrow. I didn't know you were part Greek, either ...

Great blog Mary. Loved your account of your Greek connection.

Thanks first posters!All fellow inhabitants of the blogosphere (reluctant or not, eh Sir David?)

Especially good to hear from you Kerre. It's been a while since those heady days on the tennis courts near the varsity: the white shorts, the driving forehands, my teeth biting the asphalt (literally). If you look closely at the cheesy author pic you can see where the real ones end and the fake ones begin. I am very impressed by Short Fat Chick to Marathon Runner -- not least your courage! and honesty -- and have asked for it for Mother's Day. I am hoping that simply reading the book will bring about the necessary transformation. Might even be able to get those shorts out again... Take care.