Philip Pullman, Alexandria and the democracy of libraries.

Philip Pullman delivered an impassioned speech on January 20 defending the Oxfordshire libraries in the UK - nearly half of them are under threat of closure due to funding cuts. In it he recalled what libraries had meant to him

"I still remember the first library ticket I ever had. It must have been about 1957. My mother took me to the public library just off Battersea Park Road and enrolled me. I was thrilled. All those books, and I was allowed to borrow whichever I wanted! And I remember some of the first books I borrowed and fell in love with: the Moomin books by Tove Jansson; a French novel for children called A Hundred Million Francs; why did I like that? Why did I read it over and over again, and borrow it many times? I don’t know. But what a gift to give a child, this chance to discover that you can love a book and the characters in it, you can become their friend and share their adventures in your own imagination.

And the secrecy of it! The blessed privacy! No-one else can get in the way, no-one else can invade it, no-one else even knows what’s going on in that wonderful space that opens up between the reader and the book. That open democratic space full of thrills, full of excitement and fear, full of astonishment, where your own emotions and ideas are given back to you clarified, magnified, purified, valued. You’re a citizen of that great democratic space that opens up between you and the book. And the body that gave it to you is the public library. Can I possibly convey the magnitude of that gift?

Somewhere in Blackbird Leys, somewhere in Berinsfield, somewhere in Botley, somewhere in Benson or in Bampton, to name only the communities beginning with B whose libraries are going to be abolished, somewhere in each of them there is a child right now, there are children, just like me at that age in Battersea, children who only need to make that discovery to learn that they too are citizens of the republic of reading. Only the public library can give them that gift.

A little later, when we were living in north Wales, there was a mobile library that used to travel around the villages and came to us once a fortnight. I suppose I would have been about sixteen. One day I saw a novel whose cover intrigued me, so I took it out, knowing nothing of the author. It was called Balthazar, by Lawrence Durrell. The Alexandria Quartet – we’re back to Alexandria again – was very big at that time; highly praised, made much fuss of. It’s less highly regarded now, but I’m not in the habit of dissing what I once loved, and I fell for this book and the others, Justine, Mountolive, Clea, which I hastened to read after it. I adored these stories of wealthy cosmopolitan bohemian people having affairs and talking about life and art and things in that beautiful city. Another great gift from the public library."

The whole speech is here.

I was also enrolled in a library by my mother - this one in Karori. A dark narrow place with high shelves, or so they seemed, and that smell of stacked paper.  I must have been 4 or 5. Mum was a librarian and treated libraries as others treat churches. We would each take a pile of books. Mum would get through hers in a week and go back for more. There were never any fines.

I read the Alexandria Quartet in London courtesy of Shoe Lane Library. It was in the same street where I worked. I didn't have a lot of money for buying books (my preferred option) and the library was right there, so one day I walked in. The books! And yes, Faber's Alexandria Quartet, which I had not met until that moment. I borrowed it book by book and read them every day on the tube. And after I finished, what? I'm not sure. I might have quit the Shoe Lane job at that point and moved to Athens, where I joined the British Embassy library. But that's another story.

The point is, although I buy books now (and thanks to my son I have copies of the Quartet), libraries made me a citizen of the republic of reading, and my mother handed me the key. 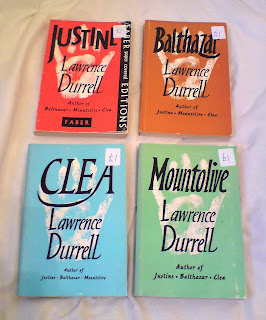 I must have been three when I was enrolled in the public library - in Miramar, the old one that was the former Miramar town hall. I still remember books like Mike Mulligan and his Steam Shovel, and the Story of Ping.
Later I would head to the library after school, borrow three books (the maximum allowed) and have them all read by the next day, when I would go back for more. That's not picture books, either!
We didn't have any money to buy books, except at Christmas or birthdays, so the library was absolutely essential. I believe it still is.

I've got those same Faber editions of Durrell's Alexandria Quartet, Mary. The first volume, Justine, I enjoyed most, and the beginning, with the narrator on his island, was spellbinding.

And it is a circle that carries on down through the generations. My wife and I are avid readers and library-goers and my two sons have loved books since they had them first read to them as infants. My parents were keen readers and now I pass the torch to my children and they in turn...and so it goes on, the great world of ideas, of the human spirit, of all that is noble and all that is ignoble about the human species. Long live libraries! (We have a beautiful library here in New Brighton which looks out over the ocean - what a setting in which to read.)