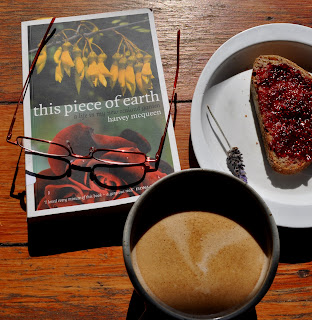 The first book on my list of hammock reading over summer was This Piece of Earth (Awa Press) by Harvey McQueen - a fellow Tuesday Poet. I started it on Boxing Day, without knowing Harvey had died on Christmas Day, and finished it three days later drunk on its lovely words. This Piece of Earth is a memoir based around Harvey's passion for gardening and food with segues into his other passions: poetry and education.

It’s a book that above all else begs you to take the time to reconnect physically with the planet: listen to the song of the tui, appreciate the chutzpah of the self-sown seedling, observe the wings of the housefly, delight in the brief scent of the violet, share a bowl of green herb soup. It is written in a way that slows you down, calms you, makes you think again - as Harvey's wonderful blog stoatspring did for me on an almost daily basis.
Here's an extract from the May & June chapter of This Piece of Earth:

The tui whirrs daily. Often a pair of fantails fluster beneath him. As winter proceeds the garden looks increasingly forlorn and dilapidated, but the violets, red pineapple sage, polyanthus, alyssum and resident chrysanthemum try to keep a brave face on things. By early June the freesias and ranunculuses are up, and crocuses and daffodils are breaking through. The Lest We Forget rose has one deep-red bloom. I pick it and present it to Anne. She adds it to the vase of violets I gathered yesterday. (p.230)

A day after finishing the book, I heard Harvey had died. I was devastated. It seemed so incredibly strange, too, to have my head full to brimming with his voice and his words when he was no longer on this earth to say them. And yet, I guess … how it should be for a writer, how he would want it to be. The next day I planted my neglected tomato plants – higgledy-piggledy with an ad hoc sort of frame to grow up, but Harvey would say that didn’t matter, nor the fact of all the self-sown calendula flowers in the vegetable bed. The tomatoes are already putting out flowers and some fruit. Every time I water or weed them I think to myself: this is a Harvey moment. I know I’ll think the same the first time I slice one of my tomatoes on a plate and eat it with olive oil and bread and a glass of good wine.

Tuesday Poem has been very lucky to have had Harvey McQueen as a member and we will miss him. I will post a full tribute on Tuesday Poem this coming week January 11. Meanwhile check out the post that went up this week with links to the Last Post on Harvey's blog, and the tributes by Tuesday Poets in the sidebar.

Rest in Peace, Harvey.
Posted by Mary McCallum at 2:34 PM

Thankyou Mary. A sad loss. His recent anthology These I Have Loved is also a wonderful book.

I was very sad to hear of Harvey's passing.

Thank you, Mary, and Claire also for bringing us into contact.

Thanks, Mary, for a moving memory. RIP Harvey.

"It seemed so incredibly strange, too, to have my head full to brimming with his voice and his words when he was no longer on this earth to say them."

That's exactly how I felt, MAry. I'd also just finished reading him - Goya Rules. He was one of the first NZ poets I arrived at, back in 2007, so fitting he should have been the last of 2010. I feel very sad indeed.

Out on the prairie said...

It seems that I can hear his voice reading this passage. Perhaps it is the laid back gardener who finds the most beauty in their creations.We all have some great wit and wisdom to share with our one on one with the plants we treasure.

A lovely book, and a lovely man. I had the privilege of working with him on his anthology of NZ garden poems, The Earth’s Deep Breathing, as an editor. The careful and creative consideration he gave to selecting and ordering the poems made me appreciate just how skilful and sensitive an anthologist can be.

How sad that he has died. And what a lovely tribute Mary. x