Tuesday Poem: These I have Loved

Not one poem this week from me - a hundred of them. Here: 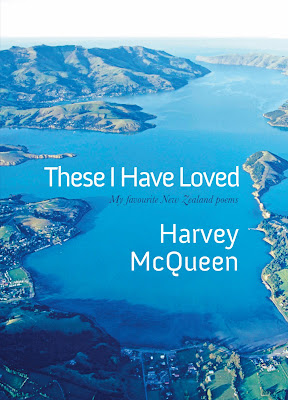 I went to the launch of These I Have Loved on Sunday. Harvey is a Tuesday Poet who blogs rather wonderfully here, but until Sunday I hadn't met him face to face. To be at the Karori launch was such a treat, not just because of the TP connection, but also because of Harvey's role in NZ poetry, which stretches back to the time when I was first properly engaging with NZ poems as a pupil at Wellington Girls College.


Harvey was a teacher and school inspector back then who co-edited Ten Modern NZ Poets (1974) - I have just found my copy on the bookshelves and, yes, there it is (I knew it was there): Ruth Dallas' Milking Before Dawn which Harvey has chosen to open his latest collection. How many NZ schoolchildren have read the poem which begins like this?

And wet and shiny as rocks in an ebbing tide

But they smell of the soil, as leaves lying under trees

Smell of the soil, damp and steaming, warm.

from Milking at Dawn by Ruth Dallas

Harvey tells the story of how, as a teacher in the Waikato, he tried a number of poetry classics on his class of sharemilkers children, to no avail. So then he read them Milking Before Dawn and this is what happened:


I had hardly finished reading it when a little boy jumped up and said ‘That's just like it is, sir. People in the city don’t know what they’re missing.’ I'd hit a gusher.

Anthologies of New Zealand poetry have over the last 50 years played a defining role in the critical understanding of our literature ..... Ian Wedde and Harvey McQueen's 'Penguin Book of New Zealand Verse' proposed a radical revision. One fifth of their material was Maori; they gave us our first bicultural canon. Equally important was their ability to pick out for the 1980s, a range of ambivalences and ambiguities, puzzles and problems, in the understanding of our literature and culture not identified by previous anthologists.

At the launch - at a church hall where I used to hang out when I was still a schoolgirl -  Vincent O'Sullivan thanked Harvey warmly for his contribution to NZ poetry, and the younger writer Kate Camp did the same.  In her launch speech, Dame Fiona Kidman paid attention to the depth and breadth of Harvey's love for New Zealand poetry and the way he poured it into the book - an eclectic mix.

There are several recent poems by newly emerging poets, and also many who spring from a group of their time, people who were seriously writing poetry in the 1960s and 1970s, a time where my own modest poetic history began. Vincent O’Sullivan, Lauris Edmond, Alistair Campbell, Louis Johnson, Sam Hunt, Elizabeth Smither, Rachel McAlpine, Tony Beyer, Bill Manhire, to name just a few. In many ways it’s a meeting of minds amongst friends.

Vincent O’Sullivan said to me the other day, and I hope he’ll forgive me for quoting him, that this book is significant in the wide range, the broad and generous tone of this selection. I echo that, the selection doesn’t live by any rule book about what’s good and what’s not. Harvey has simply chosen what he wants without fear or favour.

More of Fiona's speech here. And you know it is a good book this book - to look at (photo by Robert Suistead) and to read - not just the poems but the introductions at the start and before each section. Already I've poured over it thrilled to find old favourites, and captivated and surprised by the poems that are completely new to me. It's like reading one of my mother's well-thumbed anthologies for its comfortableness - Harvey mentioned one of them: 'Other Men's Flowers' by Lord Wavell as an inspiration.


Suffering from a rare muscular degenerative disease, Harvey McQueen regards each new day as a bonus, and this book as his swan song. His publisher Roger Steele is not so sure about that, and neither were the sixty people gathered to welcome the book. The feeling seemed to be that if there was a blank page, Harvey would find a poem for it.


I wish I had the time to include some more extracts from Harvey's collection, but maybe later. Except for these two lines for Harvey the poet gardener.

orchards of our lives. All those trees. All that fruit.

from Tornado by Jenny Bornholdt


Go here for more on how to buy the book. And click on the quill in my sidebar to take you to the Tuesday Poem hub and more Tuesday Poets. Amongst them will be Tim Jones and Saradha Koirala who were also at Harvey's launch. Another bonus!

Labels: harvey mcqueen, these I have loved

Thank you so much, Mary, for how you are enriching my (literary) soul with your blog and your links.

Like you, Milking Before Dawn was introduced to me at school in 1982 (sixth form) along with Baxter. What a forward thinking English teacher I had.

As a child, I had spent many an early morning helping out in the cowshed.

It's books like Harvey's which make one just want to strip off all the baggage and dive into the words and the sounds and images.

I'm kicking myself that I missed the launch! I'll definitely go and find the book. How wonderful - an anthology of poems someone loves.

A hundred poems, and more. Thanks Mary, this was a great summary for those of us who couldn't make it.

Thanks for this post, Mary - a great report of a wonderful event!