Poets on the oil spill and being outraged 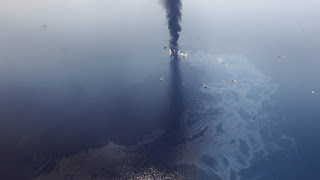 Poets are bailing into the ghastly oil spill in the Gulf of Mexico declaring in different ways that we must all take some responsibility for it. Either to make sure it is cleaned up rather than sitting back and watching it get worse, or to prevent this sort of thing happening again.

US poet Mark Doty felt a physical response to what he calls the 'murder' of the gulf that he calls 'A shutdown. A rupture.'


We need to be willing to weep, to be outraged, and to ask every question we can about our endless, characteristically American sense of powerlessness.

More here. And here's Tim Jones on where the fault lies - not just BP, he says, but all of us and our flagrant use of the not-so-good oil.

There's a useful article on the worst oil spill in US history here and an excellent article on the oil spill by numbers which was published May 3 - so the numbers may have changed since then. But the figures thrown up include this one:


25 million: Number of birds that traverse the Gulf Coast per day, and which are potentially at risk from the oil spill. According to the LA Times Greenspace Blog, "Late spring is the peak time for neo-tropical songbirds moving from the Yucatan Peninsula to make their first landfall in Louisiana," and "more than 70% of the country's waterfowl frequent the gulf's waters."

A final figure... the US government estimates the oil spill has leaked 21-45 million gallons of oil into the gulf over the past six weeks, and it continues to come. All I am is outraged. I wish I had the energy and time to be more.
Posted by Mary McCallum at 10:18 AM

Mary, for more on the history that led to this, check this out:
http://killiansaid.blogspot.com/2010/06/tangled-web.html

Thanks, Mary - it's a relief to see this issue (the outrage and the lament) being taken up here, there, everywhere. Mark's blog entry gets right to the heart of it. I'd like to add some of the links you have here to the piece I posted about it a week or so ago... okay with you? L, C (PS. I've been away - just backhome... TP arranged ahead of time... there's a fair bit to catch up on.)

link away CB! and I'll check out your post again...