The Extraordinary Storytelling of Ephraim's Eyes 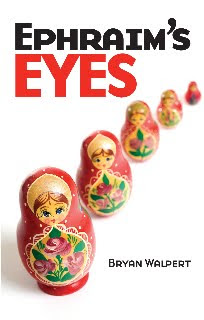 These stories are extraordinary things. Each one is centred around a single character who grieves for a loss that is usually withheld until the story plays out. Memory and the unravelling of it, and the way people try to make some sense of the apparently senseless by remembering - always a faulty business - is at the core of the book. So too is the questionable power of love to save us.

Author Bryan Walpert is an award-winning US writer who is a NZ citizen and teaches creative writing at Massey University, Palmerston North. As such, that makes him a colleague of mine (I teach at Massey Wellington). His poetry collection Etymology was launched last year and his poem No Metaphor kicked off our Tuesday Poem blog.

As his poetry does so wonderfully, Bryan's stories use language and the prism of science and philosophy to try to rein in and explain the vicissitudes of life and the resulting anguish of the people who suffer at its hands. Bryan has said: 'I think for me, as a writer, the way to the heart is often through the head.' Hence the lack of sentimentality, hence the careful, erudite and skilful writing that gives you deep rivers of emotion but without once leaning in from the important task of rowing the boat to trail its hand in the water.

In discussing No Metaphor on Tuesday Poem, I talked about the interior struggle of the man in the poem to both remember and forget, and the same struggle is to be found in Ephraim's Eyes. The characters' thoughts swirl around philosophy or mushrooms or magic tricks as both a distraction and as a way to explain what has happened to them; and in the same way they also tell stories that they believe to be true and that are sometimes clearly fiction. But Ephraim's Eyes is most emphatically not a bunch of cerebral ramblings. The  muscle of the stories is in the well-wrought complex characters who pitch-perfect voices who live ordinary lives alight with detail (in NZ and the US), and undertake work that is both authentic and fascinating.

Whether it be a man damaged by war who owns a magic shop and finds himself teaching tricks to a needy boy, a man whose job is to check billboards for damage but who is wholly taken up with checking the perceived wreck of his own life, a teenage girl who finds numbers beautiful but is diverted into a destructive sexual relationship, a woman with a secret who needs a new cupboard and gets a mycologist in as a housemate to help pay for it, a girl whose Hawkes Bay olive grower step-father is making her uncomfortable, a man who thinks he's the incarnation of the comic book character Flash.

There is something filmic about the way Bryan evokes the lives of his characters - they are so visual and so intriguing in their visual detail. Driving home last night, I kept looking at billboards thinking of the man who checks them for a job. The end of that particular story literally gave me vertigo. I was up in the air, but suddenly I knew what would happen, and it was like swooping from a great height. Bryan builds the story up to that point so skilfully - with so many interwoven layers of thought and action - that I was both afraid and exultant with the knowledge. Storytelling at its best.

The stories delight, too, with their erudition - this writer's mind is like the beautiful numbers his character in the story 'Word Problems' loves so much, and many times I pondered on the apposite cover of his book: the interlocking Russian dolls which are part of the title story and emblematic of the dense and layered thinking here as well as the stories within stories. Also compelling are the seamless shifts from the deepest darkest recesses of the individual mind to the messy stuff of humanity and then out into the wider universe.

One of the stories, 16 Planets, won the 2007 Royal Society of NZ Manhire Prize for Creative Science Writing. A man, unhinged by a grief he doesn't name until the end, ponders on the terrible ways human beings threaten the planet. The story moves in and out of global warming and oil slicks to the mundane facts of the man's life and his relationship with his wife. The end is unbelievably moving. It caught me at the throat.

The stories suggest that the struggle of the individual doesn't need to be made alone and with limited tools. Magic exists - in life in all its wonderment (from gravity to love), in science and thought and language and story and numbers, in magic tricks and the view from a suburban billboard. Bryan keeps coming back to the power of the imagination which lives unfettered in memory (and story of course) and is a form of magic - not least because it can make things disappear (or can it?)

It is magic which saves some of the characters -  allowing them to let go, to linger, to be bigger than they are. Many of Bryan's characters do not recover, although recovery is a possibility. For some, memory wins out over forgetting, self-forgiveness is too hard, and the magic is just not enough. One man (a writer) is left literally in the dark.

My one small criticism of this astonishing collection is its lack of variety - in terms of both structure and theme. The stories all pivot around a withheld secret which is given to the hungry reader in morsels via memory/backstory until it is finally revealed, and many of the stories are about terrible losses (often death) and the power of grief to destroy. While appreciating the power of stories that link together in a collection, I feel Ephraim's Eyes could have benefited from some variation to give the reader time to take a breath, and to show what else this brilliant writer can do.

All good independent bookshops will order Ephraim's Eyes if they don't have it -  Bryan's local bookseller Bruce McKenzie will. Or, if that's really not possible, go to the leading online booksellers like Amazon (if you must.) Ephraim's Eyes in published by Britain's Pewter Rose Press with an extract available here. Bryan's blog is here and he is, lucky us, a Tuesday Poet - and the editor of this week's Tuesday Poem up tomorrow.
Posted by Mary McCallum at 10:55 AM

Sometimes I get so entranced reading one of your reviews that I forget that I'm reading a review. It's that enjoyable a read. It's like watching what happens to the reader long after the book/poem is read; so the lasting effect of the book/poem comes off as believable. (I liked the part here where you said you kept looking at billboards while driving home.) Cheers.

Anonymous said...
This comment has been removed by a blog administrator.
Thursday, 24 June, 2010

Thanks S.L. - a lovely comment to read after a long exhausting day. I missed it when it came in.