Murder They Wrote - and the benefits of a nap

Brilliant crime fiction night at Cafe L'Affare in Wellington - it is not exaggerating to say I was mesmerised by the three prolific, best-selling, full-time crime writers: Neil Cross, Vanda Symon and Paul Cleave.  My daughter who was with me, was similarly smitten - especially by Cleave's serial killer - and tells me now she's going to be a crime writer. That's how good the evening was. 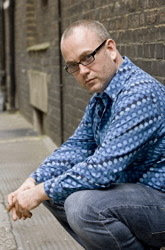 Cross is a UK suspense novelist and scriptwriter of movies and edgy TV crime drama (Spooks and Luther), now living in Wellington - 'my secret life'.

Cleave is a Christchurch author of best-selling books like The Cleaner which has seen him second to Dan Brown on Germany's Amazon.

Symon is a Dunedin author of the Sam Shepherd series that begins with Overkill - selling well here and in Germany. The event was magnificently chaired by Book Council Chief Executive Noel Murphy.

All three authors write full-time and their hard work and commitment to their craft made me realise what being an author really means - Cross writes every day all day with a break when the kids come home from school, Vanda writes from 9-3 while her two boys are at school and Cleave writes from 11 am, when he wakes up, until 2 or 3 in the morning.

A tip from Cross which he passed onto me at the end of the session - and which in turn was handed to him by Patricia Highsmith - when you want to switch from one form of writing (a TV script, say, to a novel), take a 15 minute nap. The brain rejigs and then fires again, and off you go.

I didn't take any notes because I just wanted to enjoy the session, but wished I had. Here from memory are the highlights. Don't consider these direct quotes more a kind of summary.

Cross: People leave school thinking literature is like brown rice - good for you and you should eat it, when in fact it's just one big trifle. (He was talking about how people stop reading and how they resile from crime fiction thinking it's a lesser type of literature...)

Cleave: was inspired by Stephen King books he read as a teenager and determined to write horror, then he read crime (Ian Rankin's Rebus series I think he said) and decided to go more along that route, although people tell him his novels aren't really crime fiction in the accepted sense and he'd agree. Cross prefers 'suspense novelist' to describe his work. Symon didn't intend to write crime, she just wrote the sort of books she likes to read and was told it was 'lady detective fiction' (or something like that), and while she understands the need to pigeonhole books to promote them, she thinks it puts some readers off and would like less emphasis on genre.

All three writers like to write crime/suspense to explore people's motives when they get into their darkest places. They are all fascinated by the psychology of their killers and their detectives. Cleave talked about building a killer's humanity so that a reader is on his or her side rather than on the side of his murder victims. He shared a story he'd heard from another writer about how a man will be standing on a roof about to jump and a crowd will be egging him on. Put a puppy on the roof instead and the crowd will want him to 'stay'. That sort of psychology fascinates Cleave.

Cross talked about creating his detective Luther for UK television and how he wanted to blend the archetypal brilliant but quirky detective character (e.g. Sherlock Holmes) where the murder victim is no more than a device in the story, with the 'moral' detective (e.g. Jane Tennant) where the murder victim figures as a person. He researched this by talking to a top murder cop in Britain whom Cross expected to be 'dehumanised' by all the murders he'd seen, but instead he stunned Cross by saying he felt privileged to be the one who delivered justice to the families of the dead.

Cross, Cleave and Symon all engage in research to ensure their work is authentic. Although one reason Cleave prefers to write from the point of view of a murderer is he feels it's easier than writing from the point of view of a cop - he can imagine what it is to be a murderer and doesn't have to research the details of a policeman's life. Symon similarly began her series of books by putting Sam Shepherd in a sole charge station at the start of her career because she thought there was more room there for both her and Sam to make it up as they went along.

All three writers feel murder is intrinsic to much of our great fiction and say the genre 'Crime' is following on in that tradition. Cross talked of the stuff of myth and legend underpinning his work eg. his latest novel Captured uses the Grail legend.

Cross: dinner conversation doesn't make it into Greek tragedies and myths and legends - murder does.

Cleave, Cross and Symon don't know where a book is going when they start writing and believe that's vital in keeping them going. If they're excited by the story and want to know what happens, then the reader will be too. Cleave says in one of his novels, he didn't know who the murderer was until quite a way through, then he got to a certain point, read it back over and thought 'he's the one.' He says after that he goes back in and rewrites the draft ... Symon knows where she wants to go, and has in mind some set scenes she wants in the book, but then lets it go from there.

Symon: didn't realise how difficult it would be to write crime fiction from the first-person point of view of her detective protagonist Sam Shepherd - so she uses a prologue each time to let the reader into other perspectives. Cleave agreed he'd used the same device.

Symon: as a pharmacologist, she has a good knowledge of how to kill someone using poison, but she tries not to fall back on that, preferring to investigate other ways to murder people. She cites some of Ngaio Marsh's methods including hitting someone over the head with a jeroboam of champagne.

Cross: literature is not about literary books and genre fiction - crime, suspense etc - it's just about GOOD books and BAD books.

And now, for your edification, a hilarious list of The Ten Rules of (Golden Age) Detective Fiction by Monsignor Ronald A. Knox, that Noel Murphy used go kick off the session. As he pointed out, the three crime writers at the podium regularly break all of these rules ...

Posted by Mary McCallum at 9:58 AM

Brilliant Mary... thank you for this report. I so wanted to be there, but flu bug lurking and can't quite shake it. I was looking forward to meeting Vanda, and I am a big fan of Neil Cross. What a line-up for a cold wet Thursday night in Wellywood and how fortunate are we.

Wish I could have headed along, but being in Auckland at the moment, I was unable to make it - but I did send a couple of friends/colleagues, who had great things to say about it this morning (one will write a report for Crime Watch, to be posted on Monday/Tuesday).

Hopefully it's the first of many events highlighting good Kiwi writers of all 'genres', not just a narrow band.

FYI, having interviewed Cleave a couple of times recently for articles in Good Reading (March issue) and Latitude (upcoming Winter issue), the writer(s) that helped him switch from horror to crime (well, really from 'fantastical horror' to real-life horror) were Lee Child and John Connolly - along with the true crime books by former FBI profiler John Douglas (MINDHUNTER, etc)

Thanks for the comprehensive post. Sounds like a wonderful evening. May there be many more (and some up this way too!)

It was great to see you there Mary!

It was a fun night and a good crowd. I loved Cafe L'Affare as a venue, it was very relaxed. Paul and Neil were really interesting and a hell of a laugh.