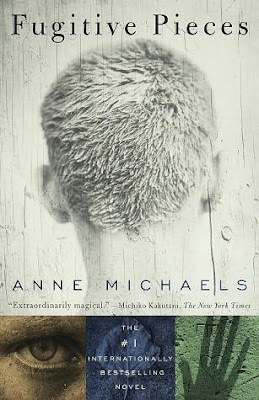 'On Idhra I finally began to feel my English strong enough to carry experience. I became obsessed by the palpable edge of sound. The moment when language at last surrenders to what it's describing: the subtlest differentials of light or temperature or sorrow. I'm a kabbalist only in that I believe in the power of incantation. A poem is as neural as love; the rut of rhythm that veers the mind.'   from Fugitive Pieces by Anne Michaels.

I have waited too long to read this book. It is extraordinary. Michaels writes as Jakob Beer, the protagonist, describes above - right at the edge of language where it tips over into something else altogether. Something visceral, neural, call it what you will.

Michaels is a Canadian poet, and here in her 1997 novel she layers 'pieces' of writing in this book as a poem layers lines or stanzas, to build something that is deeper than an ordinary narrative. At times, the language feels too intense and carefully wrought for a story - a bit like watching someone through a highly ornate iron gate  - but for most of the book I feel like I do when snorkelling in deep water, or as I imagine flying to be - deeply inside another medium and somehow invisible, immaterial. Michaels writes of grief and love with such wisdom and beauty, it hurts sometimes.

Fugitive Pieces is the story of Jakob Beer who, aged 7, is rescued from the muddy ruins of a buried village in Nazi-occupied Poland. His family dead, he is adopted by a Greek geologist - Athos - and taken to Greece and then Canada. Jakob is persecuted by the violent deaths of his family and of the millions of other Jews who died in World War II. The way he grapples with what happened and tries to make a life for himself is both provocative and intensely moving. Unforgettable.

Here's my review of Anne Michaels' 2009 novel, The Winter Vault.

i am excited! Must read - which is saying something in my sleep deprived state
( I love the cover)

the google word verification is charm is

this book is perfect for the sleep-deprived GG - you can read it in small 'pieces' - in fact it is better read that way - like reading poetry, you need to stop and rest and let the language sink in... good luck x

This is such a beautiful book. Two of my favourite lines:

‘To live with ghosts requires solitude.’

Anne Michaels writes like a dream. Thanks for the reminder, Mary.

I was so pleased to see a review of this book pop up on my dashboard - as I have wanted to read it for such a long time. Your post is most motivational - thank you for sharing!

Fugitive Pieces quickly became one of our book group's all time favourite reads. It still is, years later. Someone affectionately named it 'Mud Hair' and if we 'can't find' its real title (as is wont to happen these days, 'Mud Hair' somehow sticks. A beautiful, haunting story that lingers long after the last page and then invites you back in. Just about everyone I know who has read it, has it read it more than once. Would it be okay for me to print off your review and take it to book group this week, please Mary? L, C

Interesting Claire - I chose Fugitive Pieces for my book group and am waiting to find out what they thought of it. By all means print off my review - and I will pass on your comment to my book group to add to the discussion. Who knows 'Mud Hair' might stick with us too...!

I will add this to the list - reading time is coming up - long overdue - now I have virtually finished my novel!

Good news about your novel Rachel. Very exciting. Funny, I continue to read while I write, but I do know writers who don't. Does it keep your mind clearer, freer?

I think I find it helpful not to read whilst writing for quite a few reasons, Mary, but mainly it stops me subconsciously plagiarising, self censoring, slipping out of the voice/s of my own characters - I suppose that's the freedom, it gives my writing consistency, cohesiveness untainted by anything else - I know it is me and my words going on the page - and, most importantly, for me, it stops me thinking that everything I'm writing is much poorer than what everyone else is writing! Save the self doubt for the editing stages.