The Taste of Sorrow 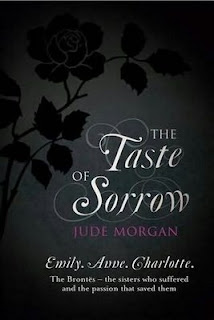 I am in thrall to this book. Since I started reading it on Friday, and ever since I ended it in the early hours of this morning, I have thought of little else. The subject matter - the lives of the Bronte sisters - is compelling in itself, but the writing by Jude Morgan is of the most astonishing sort.

And I have to say quickly at this point that a fictional portrayal of these writing heroes of mine did not appeal to begin with - but I was persuaded by lit bloggers I know and love to pick the book up and give it a try. This was sealed when I read that Bronte biographer Juliet Barker declared it 'Quite simply the best book about the Brontes I have ever read.'

Oh yes, it is. And one of the best books I have read in a long time.

Author Jude Morgan treads carefully, respectfully, quietly, so quietly you can hear him breathe at times, and then - like a hunter - he grabs his prey, twists and breaks its neck. He writes in a way that skins the animal and shows it to you, and then later elevates it, clean and like new. And all you can do is stare.

Breaking from the hunting metaphor, I was surprised at the - for want of a better word - feminist care and attention Morgan gives each one of his characters. Charlotte is at the centre, but Emily and Anne, their father and their brother, even Aunt Branwell and Tabby the housekeeper, are all developed and given life. Emily's shyness/reticence is especially well drawn.There's a sense that Morgan is feeling through the haze - much like short-sighted Charlotte does - and trying to put his hands on the exact word or phrase or feeling that will bring the Brontes to life. He pokes and prods, circles, tries and tries again. And then, there! There it is. My breath was taken away so many times.

One of the most compelling things about the novel for me is the marvellous understanding Morgan shows of the creative process - of the worlds of Angria and Gondal that the Brontes created and inhabited well into their adult lives, and the pain they felt when they couldn't write, and the intense and complicated joy they felt when they could. I found the time when the three surviving sisters finally came together around a table and shared the novels they were writing unbearably moving. And the goosebumps stood up on my arms and the back of my neck when the word 'Wuthering' first surfaced ... and the name 'Eyre'.There's a lot that's unbearably moving in this book, in fact, it is called The Taste of Sorrow after all. All that incredible genius, all those wasting deaths from consumption.... it has been analysed and written about so many times. But what Morgan has done is re-created these women by - as he says - trying to clear away the myth and legend surrounding the Brontes.


My own conviction about the Brontes was that they were not these fey ‘children of the moors’ who somehow happened to write great novels. They were very driven, very conscious as artists.


Which is what I love most about this book. The rest of the interview with Morgan is here [and it's a rare thing as Morgan is as shy of attention as Emily Bronte it seems - Jude Morgan is a pseudonym just like Currer, Acton and Ellis Bell.] And there is another review at Gondal-Girl's blog here and some Bronte fan links here  and the Bronte parsonage website here! Needless to say I've spent any spare moments I've had today trawling through the net for more on the Brontes and Jude Morgan. His novel Passion is on my reading list.
Posted by Mary McCallum at 11:30 PM

Great post thanks for the post. I so want to rush out to my library and read this book right NOW! It sounds wonderful. Jane Eyre was my favourite book when I was in my teens.

Finally got around to reading this, coincidentally, last week, and also loved it. Thanks for all the interview etc. links - I'm definitely going to look up more of Jude Morgan's backlist. I'm not ordinarily wild about the whole "fictionalised biography" thing, but this REALLY worked.

Hopefully it will also provide the impetus I need to actually read Juliet Barker's biography and edited letters...

Guess I'll have to read it, too. Great review.

Wondering what I can fully dive in to next reading: this is it!

Your engrossing review is just the stimulating appetizer that prepares my chops for the approaching meal.

I had a party further whetting my appetite with a brusque course through those well-chosen and also engaging links!

Of course, I Tweeted your review: more modern people must read the Brontes and this review-Jude Morgan's book are just the orientation!

Thanks for what I can only hope will be the prime motivator of getting me onto critical tasks so that I can earn the reward of snuggling in to your as promised page-turner!