Jawing with a blue whale - The Blue in Stanley 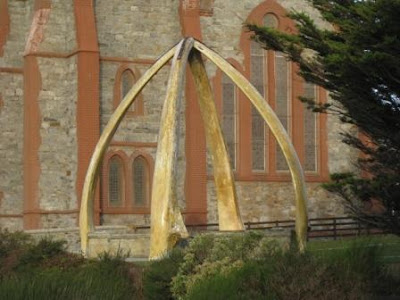 Nothing can adequately describe the feeling of vertigo I get when fiction and fact collide - the giddiness that is part thrill, part disbelief, part anxiety, part a weird kind of omniscience. It's like standing in a mirror room and seeing reflections of yourself receding to infinity. What comes first? What is true? How can all those words add up to a representation of reality that concerns and interests and moves people? How can it have a life outside of itself? And how does this thing I have made fit with all the wonders of the real world? 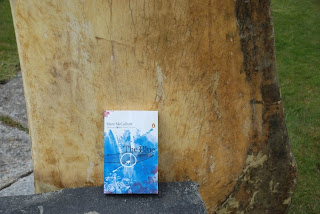 Above, you have a whalebone arch in the Falklands' capital of Stanley made from the jawbones of blue whales caught in the South Shetland Islands; and here, a photograph of The Blue next to one of these remarkable bones.

Is it nestling in delightedly, do you think, working up the courage to have a jaw about the largest creature the world has ever seen? Or is it leaning nervously, a little non-plussed, perhaps, by its close proximity to the 'real thing'?

A bit of both I think. O little audacious book.

The photographs were taken yesterday by Robert Paterson who works for the British Antarctic Survey on board the RSS James Clark. A Scot from the Isle of Bute, he travels thousands of miles to places like the Falklands and South Georgia where whaling is knitted into local history, much as it is in Arapawa Island, New Zealand.

Robert was in NZ a little while back and while here he stumbled upon my blog. Being a seafaring man who connects with old whaling towns on his voyages, he thought he'd like to read The Blue, so back home in Scotland, he emailed to ask me where he could order a copy. I put him onto Louise at NZ Books Abroad and she got to work. Unfortunately, the book didn't arrive before he left the country for his latest expedition, so he contacted Louise again and asked her to send another copy to Stanley in the Falklands, which is one of his ports of call.

So here it is, The Blue. Rather surprised to be so far from home and snuggled up to the jawbone of a blue whale. And it's all thanks to a Scot of the Antarctic! No, really, what a thoroughly lovely thing to do. I still can't quite believe The Blue is doing things in this world over two years after publication, let alone making expeditions south. There's that vertigo again...

Robert tells me that these whalebone arches are common sights in places where whalers once lived and worked. He says, 'I remember one in Edinburgh, by the Meadows, and I'm told there is one in Whitby too.' [Here's a Stanley local, Chelsea Middleton, holding The Blue beside the whale arch. It looks more confident like that I think.]

And to finish, Robert included a photograph of an old whale station in South Georgia. He says in his email:

I wonder what Johnny Norton and the other whalers would make of South Georgia? Here's a photo of the old station at Leith. There aren't many places in the world where you can see reindeer grazing alongside elephant seals and penguins - but this is one of them.

Johnny is one of the former whalers of Arapawa Island that helped me with my research for The Blue. I reckon he'd be fascinated by the old whale station at Leith. As I am. 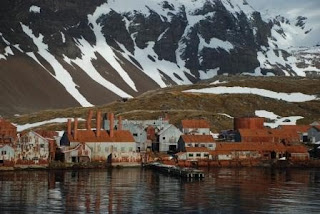 For more photographs of the travels of The Blue see the links in the right hand column of the blog - and I'd love more. Send them to marymac21ATgmail.com.

Posted by Mary McCallum at 9:37 PM

So cool! I love seeing pictures of author's books out in the 'real' world. :)