The whaler, the book and me 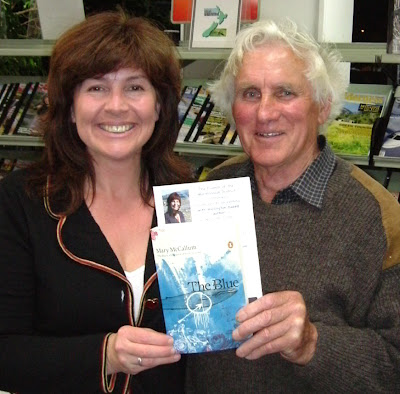 It was one of those nights you dream about as an author. Seventy-five people turned out to the Marlborough District Library to hear me talk about The Blue and one of them was Johnny Norton, a former whaler, who  helped me with my research five years ago, and I hadn't seen since. Johnny (above right) was one of the whalers who sat up at the Lookout on Arapawa Island in 2004 as part of the first DOC whale survey team. And I was there too, all those years ago, watching the whalers watching the whales, and taking notes for my novel. Johnny and the other whalers with their binoculars, and the groovy young DOC scientists with their laptops and theodolite, were wonderfully welcoming to a wet-behind-the-ears novelist. Another whaler - Ron Perano - came along last night, but he headed off before the photo opportunity. He joined the DOC survey the year after I was there.

There were other whaling families at the event, too, and people who live on or nearby Arapawa Island. I found myself rolling out all my stories about my research on and about Arapawa Island and the whaling : the marvellous and funny things I discovered, and the wonderful people like Johnny Norton I met on the way. And - feeling a little nervous with real whalers in the front row and not able to put it off any longer - I read a whaling scene.

As I read it I felt glad to be reading it and glad I'd written it. It felt like the words gave life to what these men and their families knew and loved and endured in their lives - elevated it all somehow, put it up there with the epic and elemental stuff of the myths and legends that informed my choice of whaling as a setting for the novel in the first place. It sounds a bit grandiose I suppose - but language is what I know and whaling is what they know and it's as if, without realising it, we'd given each other a gift. As I said to the crowd, I do believe fact is stranger than fiction, and often more compelling and more wonderful, but I believe it's fiction's job to take us there, and allow us to properly hear and see those people and places and events, and to feel empathy, but not in the way you always expect. As artist Francis Bacon said about art, ultimately fiction is about deepening the mystery.

Here's the beginning of the extract I read:

The sky was the colour of barely beaten egg, and the sun newly emerged from behind Arapawa Island streamed clear yellow on Lookout Hill and the men who waited there. Little else was lit at that early hour. A hundred yards below the Lookout the sea was still dark, and the hills behind were in shadow and crisp with frost. Each man on that hilltop felt privileged to be there on the edge of, the very edge of, the waking world.


It wasn't all that serious! I picked this extract because it is the best translation of what I saw and heard up the Lookout when I was there myself - the things the whalers knew, the way they talked and joked with each other, the way they did their job.

By the end of my talk, Johnny and Ron were up the front with me talking about whaling then and now, and the reason for whale conservation - it was rivetting stuff. One man came up at the end and said he'd been dragged along to hear me speak but he had to tell me he'd had a fantastic time. Well, I have to tell you, so did I.

Huge thanks to the Marlborough District Library - to Glenn Webster and the Friends of the Library especially - for looking after me so well and putting on such a fantastic event as part of their 150th celebrations, to NZ Book Month for supporting it, to Blenheim Bookworld [Peter and Charmaine] for selling my books, and to Blenheim for turning on an exquisite 22 degree-day yesterday and giving me such a supportive crowd.

Photo of me and Johnny Norton by Glenn Webster.
Posted by Mary McCallum at 12:43 PM

Sounds like it was a great event. Good to see so much activity throughout NZ Book Month! Lovely photo too.

Mary it's so special that your story and the whaler folks story are woven together. Love it. Life is enriched by moments like these.
Btw Drop off your teapot

A picture (photo) paints a thousand words.l You could re-write 'Mortification' (have you read it?) 75 would have to be bit of a record breaker.
This is maggie, but not on my own computer.

What a lovely photo!