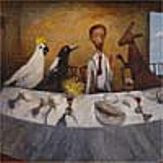 This is one of a series of paintings by Australian painter Gary Shead about D.H. Lawrence's time in Australia. He's communing here with a
magpie, a cockatoo? and a kangaroo, who all seem up on dinner party etiquette (see previous post). Although this painting, in contrast to Sue Orr's book cover, has a distinctly 'Last Supper' feel to it, with Lawrence the Christ-figure.

In fact, I took the image from Australian writer Gondal-girl's blog where she talks about a crush she had on Lawrence - exacerbated by the fact of his having visited Australia once. She asks about other people's literary crushes.

So I had a think about mine and came up with: Byron (his desire to fight on behalf of the Greeks - my father's people - vs. the Turks and his feverish death in Messolonghi added to his mystique), Samuel Taylor Coleridge (that feverish imagination of his captivated me and my friend Sandra, we poured over his poetry in my dark flat in Aro Valley) and Yeats (his political activism, his poetry, his connection with the Theosophists were a compelling mixture - I remember discussing gyres for hours). These were my romantic teenage crushes, and I quoted them, read them, tried to write like them.

Sylvia Plath was more serious than that. I really thought poetry had to be dark and confessional to be worth anything, and I used her poems as models for the dark, confessional stuff I wanted to write with lines like 'I am in the bird-tree and my throat aches'. Her struggle as a writer who was a woman and mother meshed well with my uncompromising 70s/early 80s feminism . I didn't like Ted much then (this changed with The Birthday Letters and his Collected Letters). I read everything I could about Sylvia and by her, especially her letters. When I went to London I wandered around Primrose Hill where she lived and died ... wrote anguished poems about it ...

I recently saw a one-woman show about Plath at Circa in Wellington. Spookily the Olympia typewriter the actress used as Plath was identical to one I had used in London to type up those anguished Plathian poems. None, thankfully, published. I still 'notice' Plath but I don't feel moved to read everything about her anymore, let alone write like her. Although I still envy her enormous talent and detest the way she died.

Interestingly, in the recently published Letters of Ted Hughes selected by Christopher Reid (Faber), Hughes suggests she wanted to be saved, and blames himself for not getting to her in time. Or that's my recollection - must go back and read those particular letters again.
Posted by Mary McCallum at 10:59 PM

The lives of Plath and Hughes are emblematic because their marriage perches on the cusp of the great change in sexual relations that came in the mid-1960s: see also Ian McEwan's brilliant novella On Chesil Beach, which is set roughly about the time that Plath killed herself. Sure, her poetry seems excessively tormented now, but her shipwreck is our lighthouse. We wouldn't see as
well without her.

Hi Mary, glad to see that my post has got you thinking, I will have to post my rest - however it seems that we share some crushes - Sylvia for sure. Was the play you saw Three Women? Her play for voices, was in a production ages ago myself. Her words are magic, though I no longer go back and look at them with that frustrated 20 something eyes....

Does having a crush on Johnny Depp playing JM Barrie in Finding Neverland count?

Sylvia Plath was absolutely an early 'literary crush' for me too!
You'll be interested to know that Janet Frame started writing her novel "Towards Another Summer" the week that Sylvia killed herself, and partly in response to that death. I don't think Janet knew Sylvia but she was also living in London then (February 1963), and was deeply affected by Plath's suicide and she deals with some of the relevant themes in her novel. There's even a poem in the novel (page 48-49) that is an elegy for Plath, and full of Plath symbolism.

Goodness. I am thrilled with Denis' metaphor, deighted to find Gondal-girl and Paradoxical Cat and I share a literary crush, and have to say I agree re. the Johnny Depp crush, Vanda, although it is highly frivolous of you to bring it up here (-:

Denis, maybe I over-used the words 'dark' and 'anguished' in describing Plath's work. I don't actually believe Plath's poetry is excessively tormented - given her brilliance, her mental state, and the struggle she had as a woman writer at that time. It is tormented, of course, but understandably so. But yes, a shipwreck and a lighthouse. Thank you for that. Lovely. And I must read On Chesil Beach now.

Paradoxical Cat, I must also re-read Towards Another Summer which I loved deeply. It will resonate differently now I know about the link with Plath's death. I can imagine it being a terrible blow for Frame. Thank you for sharing it here, PC.

Hi again Mary, just to let you know there's a bit more info on 'Slightly Framous' (my literary executor blog) about the connection between Sylvia Plath's death and Janet Frame's inspiration to write Towards Another Summer.
Cheers
Pamela

Thanks, Pamela, fascinating stuff. Have posted on it on the blog.

And Gondal-girl, the Sylvia Plath play was Edge with American actress Angelica Torn as Sylvia. It was powerful intense stuff and, if I remember rightly, was all on the last day of Plath's life.

The annoying thing about Birthday Letters - one of Hughes's lesser books, I think, though still fascinating - is the way he writes as if Plath's death was fate working its inexorable course. I lost count of the number of variations on "Little did I know..." as yet another remembered episode presages her turning on the gas.