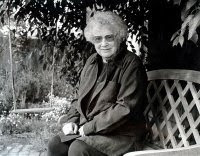 Dear mother, dear father dear husband dear child,
there is no answer,
this microphone like a beehive celled with honey
is blocked forever with the sweetness of death.

In February 45 years ago, Janet Frame started to write Towards Another Summer which was published postumously last year. Three days before she appears to have begun work on it, Sylvia Plath had committed suicide. Frame's literary executor and niece Pamela Gordon says the events were not unrelated.

One example she gives is the poem above which is in Towards Another Summer and, as Pamela says, 'is redolent with Plath-like poetic symbolism and does seem to contain a reference to the BBC radio recording (of Plath re-played the week of her death) which Frame would have been familiar with.'

Pamela says Frame, who was living in London at the time, grieved for Plath. Read more in a fascinating post on Pamela's blog Slightly Framous. Interestingly, the post seems to have been triggered by an earlier post here on literary crushes.