My mother folded
heavy blankets
into hospital corners
topped with candlewick.
At night I was pinned down
like a butterfly in a case.

Now we are hiding
from each other
but I'm the only one
playing the game.

Inside the wardrobe
I spy old wallpaper
and under the carpet
oiled floorboards.

Who'll find me
now she's gone --
knees by ears tight
breathing all of me.


Helen Heath launched Graft (VUP) this month at a moving ceremony in Unity Books, Wellington. Moving because it's Helen's first full collection and because these are poems that spring from both heart and brain but come back in the end, each and every one of them, to the death of Helen's mother when Helen was nineteen, over 20 years ago.

In a post on her blog nearly two years ago, Helen wrote about how the death of her mother had defined her and quoted this:

My mother is a poem
I'll never be able to write
though everything I write
is a poem to my mother.
Sharon Doubiago


And of course we've just had Mothers Day, and on top of that (bear with me) my middle son turns 21 any day now, and I've been looking through all those old photos and thinking what it means to be a Mum and feeling a bit emotional. Then there we were on Mothers Day morning and middle son wasn't home yet and the others weren't up yet, and my husband was making coffee ... A knock at the door. On the doorstep, forgotten his key as usual: middle son, his cheeks fresh with cold. He'd walked nine kilometres to get home to see me. 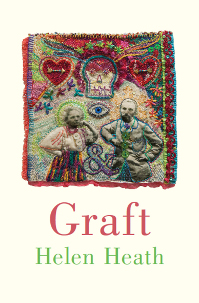 A number of the poems in Graft are directly about Helen's mother like the one above which constricts my throat -- the claustrophobic feel of it -- the heavy blankets pinning the child down -- all that briskness and efficiency -- the tightness in the cupboard, of the air, the child-in-the-woman curled up so tight, foetal, full of missing, glimpses of another time - wallpaper, floorboards - so close.

There are poems which appear to be indirectly about Helen's mother too: inserted throughout the collection are poems about science and scientists - a fascination of Helen's -- and an area, I think I'm right in saying, that her mother was involved in. These scientists in the poems are people like Marie Curie and Beatrice Tinsley who died of terrible diseases, often brought on by the work they did. The work they did unfolds here in precise and majestic detail.

There are fairytale poems too - which so often have absent mothers - and poems about faith and about Helen as mother.  The effect builds powerfully, so powerfully, poem by poem through each of three sections.

In the second of three sections in the book, there are poems are about Helen's journey to her mother's homeland, Ithaca, to find her mother there. Through language and mythology and place she tries to place her feet where her mother trod and perhaps treads still. One part of the long poem Graft feels like the answer to -- the CPR to -- the open door to -- Tight.

I lie under the olive trees
and say to them, to the hill,
to the sea: I am ready.
I press my ear, my cheek,
to the ground. I smell the dry earth.
I say to the island: I am
ready to hear you now.
I wait. After a while
I hear it. There is nothing there
but a hum of silence,
the tension vibrating. The hum
touches my cheek, passes through
to my mouth.
I swallow, turn and look up.


Later in the same poem, she says:


If I dig a hole all the way through
to before, perhaps then I can hold her.

This middle section of the collection especially grabs my heart, for the search Helen's engaged in, and for a different reason too. Like Helen I am part Greek, and know that feeling of going to that country to find what you do and don't know. These poems with their delicious details of language and place ('Everything familiar/yet askew. Apo thalassa sto Vathy.') made me want to go back there very soon.

In the third section, there are more poems on family, a little science, and a series on Justine of the Hutt Valley who wears ugg boots and gets pregnant to the brother of the speaker of the poem and decides -- against the tide of the book -- not to be a mother -- but has an abortion instead. Aaaah - it's like letting the air out ... but no, the final poem is Justine's, and she's rising above it all somehow, floating, like magic, like faith ... The Rapture? Which returns us, perhaps, to the first poem in the collection which talks about Isaac Newton and the Book of Revelations. My only small gripe: I really wanted that final poem to have Helen's mother in it somehow. Justine's interesting, but feels like an interloper...

Such a good book, though! A powerful collection that I read at a sitting and continue to be excited by.

On the Tuesday Poem hub this week, Helen Rickerby who published Helen Heath's earlier chapbook Watching for Smoke, is posting from Graft too. I am looking forward to seeing what she has to say -- go here.

I didn't mean to say quite so much here but am pleased I have. Now I really have to get on with the speech for a certain 21st. Oh, and one more thing about Mothers Day on Sunday... After a time with my children, I went to visit my Mum. Of course I did.


Tight is published with permission.
Posted by Mary McCallum at 12:01 AM

Superb write up of Helen's poem 'Tight' and her beautiful collection. My favourite is 'Spilt', the daring of the sensual and the sharing of the breast with lover and child - the hinting at intimacies so very well done, and not easy to do so well.

It's a great book. I'd just like to add that I paid for my copy.

Fascinating to read your thoughts about the book, Mary. I feel there's so much to say, and this reminding me of some other things. Certainly there are mothers everywhere, and there is cancer, and their are scientists whose cancer is caused directly by their science, or indirectly, but it's like a dark, swirling galaxy. Ah, clearly it makes me rant. And hope you had a lovely Mothers' Day.

Really enjoyed this commentary and introduction to Graft, which I don't have yet but which I surely will seek out now, thanks to this and Helen Rickerby's post at the Tuesday Poem hub this week. So heartfelt and sure do these poems seem. Not very easy to do when the subject is so close... I very much admire what I see here tonight, and I thank you for the discussions here and elsewhere.

This is such a moving post. Thankyou, for the great review of Helen's book and her poems. My senses are all prickling. I look forward to reading the book.
Loved your story about your son.
Happy 21st birthday to him and you!