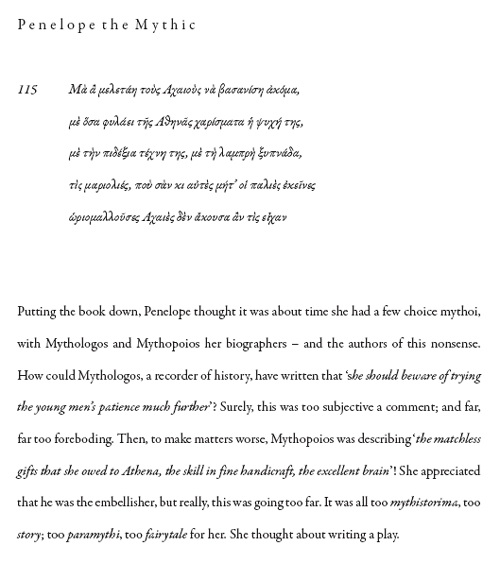 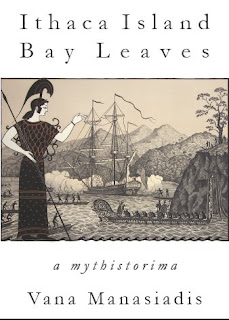 I love this poem - for the Greek at the beginning without translation, for Penelope 'putting the book down' after reading her own story, for the way the poet plays with the word 'myth' and with myth-making (mythopoios) and storytelling (mythologos) in a collection of poems that is all about words and myth and story and history and biography, the way the translation of the text is knitted into the poem,  the way the colloquial is mixed with the mythic is mixed with the Greek.... which only just skims the surface. An understanding of individual poems in the collection Ithaca Island Bay Leaves: a mythistorima (Seraph 2009) is achieved only through reading them all.

Born in 1973, Vana is part-Greek, part-Celt (which is me with a bit more Anglo-Saxon thrown in), has a degree in Classics and English and was part of the same MA class I shared with Airini Beautrais who wrote last Tuesday's Poem. Vana is one of those writers who had clever, insightful and 'intimate' things to say about every piece of writing put before our class. Her own work unfolded in a way that surprised her, but the result is something that feels both sure and tentative in the way of all exploration, and both visionary and intimate in the way of all good stories. Vana explains in an interview on Tim Jones' blog what this collection really is.


"Although mythistorima specifically means ‘novel’ in modern Greek, and also more generally ‘fairytale’ or ‘fantasy’, the etymological meaning (perhaps not surprisingly), is myth and history combined - from the time when people disseminated myths and (his)stories by word of mouth. I really like the fluid and undisciplined nature of speech and so I decided to kind of unfix the form of Ithaca and assume oral language with its tangents, fillers and pauses, as the governing concept. I tried to make sense of all the different forms in the book as transcripts, or fragments, then pieced them together so that they might ‘tell’ a kind of story while still remaining a little elusive."

Like Airini, Vana experimented with the prose poem, but she also produced a range of poetic styles to suit particular 'fragments'. There are alternating lines of dialogue, couplets, long sprawling poems, short compact poems as well as prose poems. Interesting to have another prose poem after Airini's last week - which stirred up a range of responses, among them a view that prose poems are not poems at all. Interesting, too, that Vana is influenced by the inimitable US poet Anne Carson who is well known for disrupting genres. Here Vana explains in the Tim Jones interview why she likes Carson ...


"...for her play with forms, and the unpredictable, magical, moving, powerful combinations of those forms, and times, settings, and voices. And, she knows a lot of stuff. When I read Anne Carson I feel in the presence of both raw heart and razor-sharp mind."

Which is what I feel about Vana's work.
A NZ poet who teaches, Vana is currently living in Crete working on a collaborative play and hopefully another poetry book. Ithaca is available from Seraph Press (I'm sure her publisher would do an overseas order) or all good independent NZ bookstores using ISBN: 978-0-473-15235-2 and Vana has given permission for Penelope the Mythic to appear on my blog. Thanks to her, and to her publisher Helen Rickerby for organising the jpg of the poem. More from Vana's Tim Jones interview.
And here's more on Carson for those who are interested. It makes me want to go back to read her, especially the magnificent verse novel Autobiography of Red which blew me away in my MA year and which I am pretty sure was recommended by Vana.


"Carson's works of verse and prose are characterized by several unique formal and stylistic qualities. Most notably, Carson blurs traditional categories of genre, constructing hybrids of the essay, the autobiography, the novel, the verse poem, and the prose poem. Carson's background as a classics scholar colors all of her writings, which feature frequent references to Greek mythology and such ancient poets, philosophers, and historians as Sappho, Plato, and Homer. She routinely renders elements of history and mythology in contemporary terms and modern settings, often conceptually closing the distance between the past and the present. Her verse places references to modern popular culture, such as film and television, side by side with references to ancient Greek culture. Her pastiche approach to genre, form, and subject matter, as well as the strong element of irony that pervades much of her work, have earned her the designation as a postmodern or post-structuralist writer, although the terms metaphysical, surrealist, and magical realist have also been applied to her work."

Fascinating post/poet, Mary. I note that much of our vocabulary this week is very similar: myth, the colloquial, language, the translation of experience into the metaphysical and beyond.

I enjoyed the humour of Penelope's "voice". Amazing, huh, how those old stories are still speaking to us after after thousands of years, and giving us something fresh to say.

I'm sorry but this has nothing to do with this particular piece of writing, but I just had to say that I think it's a really cool and great idea to quantify your progress on writing projects as evidenced on your blog. Novel = 21%, Children's Novel = 82% with little graphs. Very groovy.

I dream of a Writing Residency or Fellowship, but the catch-22 is they only go to established writers who presumably ignored the washing, their children and the 4'-5' offshore days where the tubes were whispering: "Come into the green room."