Fifty Years from the Elephant's Head, Broken Hill, to now. 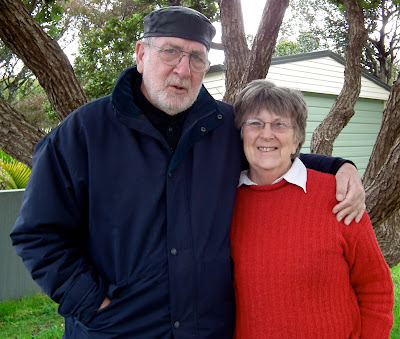 Here they are my parents - Lindsay and Norma McCallum - fifty years married. This picture was taken yesterday.

Married in Ndola, Northern Rhodesia (now Zambia), in 1960 where I was born, they moved to Bermuda for four sunny years - enter my brother, then to Wellington New Zealand (not so sunny!) where my youngest brother was born, took us to England (where Mum came from) for two years and then back to NZ again. Adventurers both.

Dad - a fun, gregarious fellow and snappy dresser, who likes to be up and doing, loves news (worked as a journalist and in PR for most of his working life) and sport (swims, plays petanque now). Mum - a caring community person, more retiring than Dad, reader and music lover, wrote columns and cookbooks and worked as a librarian. 'Family comes First' is their mantra (eight grandchildren now), and they offer support and encouragement at any time and any place. They have for all of us a fierce pride. Magnificent friends to their friends too. Some might call them bossy (people call me bossy), others would call them  'can do' will-move-mountains sort of people. Good-hearted. Yes.

And always always up and off somewhere. When I was young we never stayed in any house longer than two years (they just shifted again last year! they say it's for the last time, but I never believe them.) Needless to say they travel light and (due to Mum) economically.

Dad was born in Greece to Greek/French/ English parents and was a refugee during the war living in Egypt, Africa and then England, and stayed there until 19 when Africa called (in the form of the colonial police force). Mum was brought up in Seaham in the North of England, but as soon as she could she shot over to Greece to work as an au pair - unheard of in the street where she lived. Back in England, she worked as a librarian and police officer and then.... Africa called.

Remember that movie with Meryl Streep that begins 'I left my heart in Africa'? I think my parents picked up another heart while they were there and brought it away with them. It is in a box in their hot water cupboard beating its own beat. Something more expansive and penetrating and perplexing and profound than any other sort of beat. It is the heart of their household dug from a soil I knew once, briefly, and where their feet stood fifty years ago while they exchanged marriage vows. How young they look! How happy. How sun-kissed.

She was Norma Corrigan, her mother in Seaham baked the wedding cake and sent it by sea. They couldn't afford to travel all that way. Neither could Dad's Mum in Athens. There were lots of friends at the wedding, though, all shiny and elegant. The sun shone. On the way to their honeymoon at the Elephant's Head Hotel, Broken Hill, the car broke down. It was night and an empty stretch of road. All they could hear where the drums. Dad sent Mum off in a passing car and waited for help. He got to the Elephant's Head eventually, but it was a long wait for a new bride.

Fifty years. I am so proud of them. For all the hard work, the strength, the commitment, the optimism, the fun, the sense of adventure, the love.
Posted by Mary McCallum at 9:14 AM

Lovely story, Mary. How lucky you are to have them, and they you, and all the places you've graced in the world. Mazel tov for fifty years!

Bless! And thanks for sharing them, Mary.
Belinda x

LentenStuffe said...
This comment has been removed by the author.
Wednesday, 08 September, 2010

Mary, what a lovely tribute to your parents and a great photo too. 50 years - amazing - please pass on my congratulations to them.