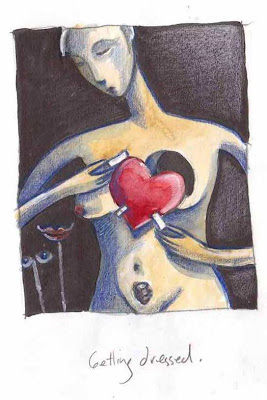 Tethering the Heart
for Fi


To tether the heart we need more than tape –
needle and thread,  perhaps,  string,  staples
or, better, a screw to hold the thing in place.
And what to do with the eyes and the lips? I’ll
say again, needle and thread, string, a screw.
Without vigilance now, the result concerns:
heart awry, eyes askance, lips askew.
Forgive me, old friend, but we’re on the turn -
old lino peeling to show a soiled
floor, lines where insects made their way, a dank
smell we cannot shift. Without strings to hold
it, the heart takes advantage: nudges a loose plank,
slips out - shy and uncertain as a milk-fed calf.
What then, my lovely? What could it do, that untethered heart?


My friend - artist and fellow Tuesday Poet Fifi Colston - posted 'Getting dressed' one Tuesday recently and asked if it constituted a poem. I immediately wanted to put words to it - there was something about the concentration and suggestion of melancholy in the face, and the insubstantial sticky tape for such a big heart. And I've known Fifi for (um) decades.... since she was sweet thirteen with a mop of blonde hair, groovy shoes and a talent for drawing. And so the poem lifted off ... but the first draft had a sonnet inside fighting to get out, or that's how it seemed to me.

I decided to work on it and see what I could do to make that happen, but it wasn't a simple thing at all. It was difficult and frustrating. The rhyme scheme abab/cdcd/efef/gg took over the words for awhile and made them seem trite. I thought of returning to the original poem but it seemed less substantial than the tighter poem that was an emerging sonnet  ... so I kept working on it.

I started to get excited by the way the form interrogated the words and the ideas behind the poem - which form does, but not usually quite so mercilessly. Many many hours later, this is it. A loose sonnet (no iambic pentameter to speak of and half-rhymes all over the place  ...) but a sonnet nonetheless?

I still wonder if it works. I wonder if there is enough of a fall onto the final word in each line, and if that matters, I also wonder if there is enough of the shift between each of the three quatrains (sets of four lines), and between them and the final couplet. What I'm pleased about is the way the poem has finally emerged with both substance and form. It feels like it's been a long road... better stick my eyes and mouth back on (where is that bloody heart?) and go out into the world again.

Thanks Fi. For more Tuesday Poems please click on the quill in the sidebar.
Posted by Mary McCallum at 12:01 AM

I know it's not strictly the poem, but I do love this line...

"better stick my eyes and mouth back on (where is that bloody heart?) and go out into the world again."

I love this! I think what I find most appealing is how you have managed to make it conversational and relaxed within the constraints. And if you hadn't told me, I would never have known you'd wrestled with it (a sure sign the poem has worked). Oh and also, I didn't pick that it was rhyming! Which is another sure sign that it flows and that the rhyming is subtle and unforced.

oh Mary- you GOT me. Thankyou- I shall print it out and put it next the sketch. Maybe I will turn it into a painting like I once intended in dark days with a empty heart x

haha- my word verification is 'floggr' somehopw that seems so right!

a nice collaboration with hearts such a tricky topic - form poetry is good at containing stuff, and I'm always a complete sucker for rhyme.

Hear, hear to Kay's comments--I very much enjoyed this and it was only after that I thought: oh yes, of course it's a sonnet ..." Love your way with words, Mary.

I like very much how "on the turn" is also on the turn of the sonnet itself, and the questions posed in the final lines, which open out the poem as much as they bring it to a close. Lovely, Mary.

A tricky subject to pull off - and add that to the form - but you did it a treat - wonderful sonnet. I thought it scanned really easily and was a joy to read.

I posted a sonnet, too, yesterday but had to remove it so I doubt you caught it but I'd love your thoughts on it sometime.

Hey rachel - just remembered your sonnet - I didn't see it - do you want to email it to me? I'd love to read it marymac21ATgmail.com