side by side with tom waits 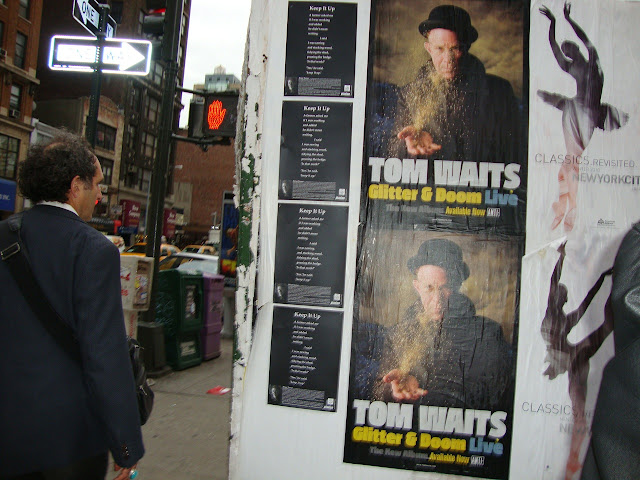 The Phantom Billstickers are back! They're putting poetry out on the streets of NZ and the US and, it seems, the World. Catch this - Phantom Poet and NZer Brian Turner (black and white posters on the left) hanging out with Tom Waits somewhere in central New York City last year.

This year, there are ten more poets from NZ and beyond out there on Phantom posters, and they will be plastered up all over NZ and the States, as as far afield as Berlin. They're being launched at old Government House (Uni of Auckland) next Wednesday April 28 5pm. All welcome.


The ten featured poets this year include Stephen Oliver with his poem The Great Repression which should go down a treat on the streets (if you look closely, you can see it in the piccy below behind Iowan librarian Martin Schmidt - and late note: apologies for referring to this man earlier as Stephen Oliver himself.) 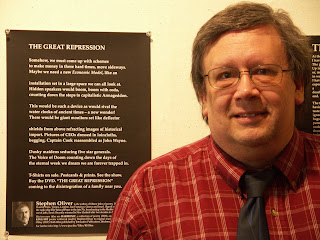 Anyway, as the organisers say, this project is kinda punk, kinda rock'n'roll, yanking poetry out of the the careful slim volumes in the bookshops, mussing up its hair, piercing its nose and teaching it to yell. The project is also about hope.

"In a world of splitting opinions, extreme violence and never-ending political and commercial intrigue, the aim is to bring Truth and Beauty back into the streets. This is what has been missing. These posters and in fact all posters are truly 'Flora for the Concrete Jungle'. The wish is that people partake and celebrate in the creativity of language. The aim is inspirational and uplifting, the presence of poems in our cities is about re-claiming the world through art."

Apologies for the capitals, my html has gone haywire... but, oh, I love the concept of Phantom Bills. I reckon it's on the same page as the Tuesday Poem blog I've just started with 20 other poets from here and elsewhere. For the past two weeks we've used our blog to tell a bit and draw attention to ourselves in the blogosphere. It's a kind of open mike session on a digital street corner - we select a Tuesday Poem each week to focus on and the link to a host of poems via a live blog list. All day they pop up - and into the night when the Americans awake - and the interested blog reader just has to click on them to read.

We're madly inclusive so any poet who blogs is welcome to join us - young, old, from Dunedin, Boston, Tipperary ... The catch line is 'A fresh poem every Tuesday and that's just the start.' Okay, so a lot of our readers are poets - and one of the marvellous things about the Tuesday Poem is the way it creates a community and encourages poets to write and share their stuff and comment on other work - but I can see from the viewing states that we are also getting random hits from the blogosphere: people who light on us (as if passing a street corner), and others who appear to be seeking us out. One of the seekers is novelist and teacher Tania Roxborough (of Banquo's Son fame):

Wednesday is my creative writing class day (lunchtime in my room with 20 odd keen bunnies) and we are just loving the Tuesday poems. I have a data projector in my room and we sit in the dark and oh and ah over your poems. You (as in all you wonderful poets) may or may not want to be a fly on the way with their responses - these girls are quite opinionated. Today I will show them Harp and Well and Mr Walpert's poem (can't remember the name). They absolutely LOVE being a little bit a part of something that's happening right now and 'discovering' poets and words and enjoy being delighted and surprised by words and the arrangement of them. Thank you. Now, back to the marking!

Something that's happening right now and discovering poets and being delighted and surprised, is what it's all about really. Phantom Billstickers quotes one of the original poetry rockers:

The only thing that can save the world is reclaiming the awareness of the world. That's what poetry does. Allen Ginsberg.

Whether the discovered poem is peeling off a wall in New York City or in front of a bunch of sandwich-eating teenagers in a classroom in Dunedin, it's alive and loud and hungry and prey to exhaust fumes and spit and crumbs.
Do visit the Tuesday Poem project and then keep an eye out for the Phantom Bills - wherever you are. Here's the list of the Phantom Billstickers' 2010 poets.
THE POETS


Tusiata Avia, Pacifika performance poet and current Ursula Bethel Writer in Residence at the University of Canterbury in Christchurch.


You can read more about the Phantom poetry project on www.0800phantom.co.nz