Slime balls and fire balls, it's Under the Mountain 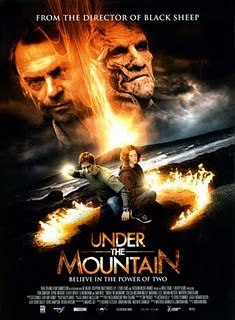 Like the director's sister, my daughter tried out for the part of Rachel (the film not the TV series), but was too young and didn't have red hair. It was too late, she was already smitten by the Maurice Gee book, the upcoming movie and the passion of the director, Jonathon King, whom we heard speak at Te Papa. She's been waiting to see Under the Mountain the movie ever since and the two of us went along tonight and really enjoyed ourselves.

The script is smart and funny, the red-headed twins [apologies for not knowing their names] are fantastic together, their cousin and his girlfriend are nice comic relief, Sam Neill does a good turn as a fading fire-maker, the setting [Auckland] is pretty damn cool with the water and the volcanoes... and there is a nice contemporary feel to the movie from the million dollar plus seaside concrete home to Rach reading Elizabeth Knox's The Dreamhunter to the cuz having a poster of The Flight of the Conchords on his wall....

I had some quibbles with the slimy aliens - it felt abit late 70s/early 80s to me. I know Gee wrote them like that, but getting these slimeballs onto the screen three decades on could have led to a facelift [perhaps a digital one? deal to all that dripping? but then again the die-hard fans might have objected.] And I also felt there needed to be a bit more happening than there was - more glimpses of the baddies, more bad guesses, more creeped out kids, more chasing..... Issy, on the other hand, had no quibbles. Oh and we both love that scene when Rachel turns into a great ball of fire and unites with her flaming bro.

If you didn't follow the link above.... Jonathon King's sister is award-winning writer Rachael King who writes on her blog about her love for Under the Mountain, and her brother's success with the movie. And it is a success, I reckon - a great Christmas/New Year/Holiday movie to take the whole family to.
Posted by Mary McCallum at 12:16 AM

Looking forward to seeing this!

I just wanted to stop by and say merry Christmas - I hope you have a wonderful day!

Thanks Andrea - and Merry Xmas to you too!