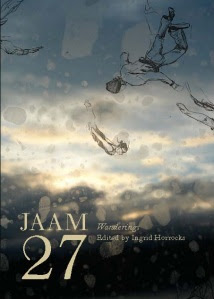 Here it is, JAAM 27, Wanderings, edited by Ingrid Horrocks. And in it, you can find me wandering around with the likes of Martin Edmond, Kirsty Gunn, Tina Makareti, Helen Lehndorf, Vana Manasiadis, Vivienne Plumb, Johanna Aitchison.... and thirty or so magnificent others.

My piece is called More Things on Heaven and Earth, Margaret. It is creative non-fiction this time, a genre that I've worked at as a journalist and a blogger, but not much outside of those spheres, and not daring to give it a fancy title like that. It pleases me enormously to see it here - one of only seven non-fiction pieces. The rest of JAAM 27 is short stories [11], a healthy stack of poems, and some colour images from Mike Ting.

The brief from Ingrid said she was interested in work about wanderers and travellers as well as works 'that digress in creative ways from narrative, argument or genre.' So my non-fiction effort is about fiction and real life and how they collide sometimes in unexpected ways. I still like it on re-reading, although I can't help but feel how meagre it is up against all the other stuff, not least the moody Kirsty Gunn story it nudges in

I'm still reading JAAM 27, but already it strikes me that there is a certain mood to it that reflects its editor - a writer of travel memoir, a poet and academic: Quiet. Calm. Reflective. Cerebral. Compassionate. In tune with the physical world.

The pieces I've read so far throw up a world where nothing is known for sure, but where the questions asked are not angry or bitter or tired, but rather simple questions posed in whole sentences on a wind-blown hill where 'macrocarpas/ kneel down and pray' [The Sinews of Ohau Bay by Keith Westwater] or beside a secret lake in the warmth of the sun [Memorial by Kirsty Gunn].

Water certainly features in this journal - water to lie beside and cross and walk through as rain. There are a lot of trees, too, and a reassuring amount of earth to anchor things. 'Worm leavings' even [in the end by Tina Makereti]. The physicality of the world we know triggers thought or holds it. Like it did for the Romantics, I suppose, except that there is less certainty here, more flux, boundaries that blur. And there are babies at the breast, wedding dresses with stories to tell, characters in novels that turn up elsewhere, and text messages that 'don't always arrive intact' [from The Thousand Ruby Galaxy by Martin Edmond]

That feeling, she knows now, looking back on all this, of getting 'lost' on that holiday as Karl had said they were when he'd woken up to find himself somewhere unexpected, was not being lost at all. It was the feeling, at the minute of letting it fall over her and claim her as she lay on the grass, of herself, who she was, what she wanted, what she didn't want. [Memorial by Kirsty Gunn]


Welcome to the shifting world of JAAM 27. More details here.

Note - The art work on the cover is by Rachel Walker and called Falling Through Time.

Posted by Mary McCallum at 5:15 PM

Congratulations - I love the idea of creative non-fiction, and I know a bit about the subject of your piece "Sarge", so will be fascinated to read it - how lovely to be there alongside Kirsty - yay, I'm envious of that for sure - an impressive line-up.
It's great building up your repetoire so to speak and broadening the writing portfolio.