this land of giant angularities 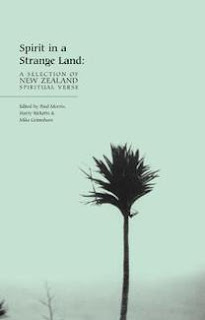 I have fallen in love with this unassuming book that has been on the bookshop shelves since 2002. It is an astonishing anthology of NZ spiritual verse - not religious verse, but pure, hearty, searching, gutsy, naughty, wise, spirited verse that tries to express the stuff that is New Zealanders by reaching outwards first and foremost, rather than delving inside like a surgeon looking for a tumour.

The thing is, I spent a morning this week trawling through NZ poetry for a friend who wanted some words for a client's reception desk, and while I re-discovered the marvellous, I also re-discovered the listen-to-me, watch-me, I-am-the-pivot-point sort of poetry. The bald 'I', the bald eye etc. I started to feel like you do after too many coffees - bloated and agitated. Reading this collection, leaves me feeling as I do when I've climbed through the bush to the ridge in the hills behind us.

In the introduction, the editors, Paul Morris, Harry Ricketts and Mike Grimshaw explain how they see this NZ spiritualism:

One aspect is the hemispherical, seasonal and other forms of dislocation, celebrated and re-inscribed under the southern skies, as in Charles Allen's 'Antiphon', M K Joseph's 'Easter in the South'. Lauris Edmond's 'Another Christmas Morning', and Eileen Duggan's 'A New Zealand Christmas'.


It's all that and more - some of it new to me, some of it old. I was intrigued by Andrew Johnston's 'The Bibl', was blasted by Vincent O'Sullivan's 'Angels, whacko!' [the first time in a long time a poem's made me sit up and laugh] and been reminded again of the sheer wisdom and insight of Lauris Edmond on reading the extract from her 'Wellington Letter'.

On top of that, the essay at the end of the book by Paul Morris explained to me for the first time - really explained - this country's spiritual engagement with nature [more of this in another post]. Meanwhile, here are extracts from 'Wellington Letter' which, I believe, explain to some degree, the current response to the Witi Ihimaera plagiarism controversy.

Let me tell you of my country, how it
suffers the equivocal glories, the lean
defeats of a discontented not a tragic
people; how it dreams in small townships
of interest rates and deals, possible
adulteries, the machinations of committees,
sickness and the humanely disguised
failures of children - not hunger, seldom
despair, but perhaps a rifle shot across
the dark paddocks, the indefensible sting
of a snub, the ache of boredom...

In this land of giant angularities
how we cultivate mind's middle distances;
tame and self-forgiving, how easily
we turn on one another, cold or brutish
towards the weak, the too superior...

I love this book! One of my favourites. And Mike Grimshaw was one of my lecturers at university, and I had a huge crush on him. That's my embarrassing confession of the day.

Hey Cat - I don't know Mike Grimshaw at all but he must be pretty wonderful if you had a crush on him. He and Harry and Paul have created something rather marvellous haven't they?