The catalogue of lost books

There are gaps in everyone's bookshelf where those books went - the ones you lent.  You remember the books and, with the important ones, usually remember the people you lent them to. But you aren't in direct contact, and it would take an effort to find that person, and even more effort to make polite reminders about the book. You remember only too well when you said (bossily? generously? casually?) 'you must read this', and why you said it, you remember thrusting it into their hands, the diffident way they put it into a bag or onto a table, you remember them leaving with it.

The Catalogue of Lost Books

The Incredible Lightness of Being by Milan Kundera (a problematic Czech-born communist) - this is a philosophical novel about lovers in the Prague Spring discovered by me in London in 1984/5 via a Guardian review read at the laundrette. I wasn't buying a lot of books then because I didn't have the money, but I bought this one from Foyles, I think, or somewhere near by. We lived a five minute walk away. I read it, loved it, took it to Athens when we went there to live for a while, and then handed it to my late aunt's lover to take home. I think I was trying to impress her, I think I was trying to give her a special gift, I think I was trying to make her like me. She was a Greek communist with scathing eyes and blunt hands whom I've never seen since. 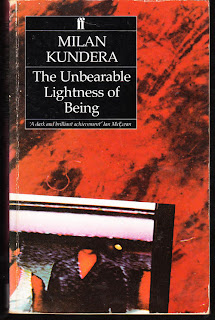 Michael Chabon's The Amazing Adventures of Kavalier and Clay - a captivating story about the start of the comic book industry through the lives of a Czech artist and Brooklyn-born writer. My children were small when I read it, and I seem to remember sitting on the floor of the bathroom with the book in my lap while they frolicked in the bath. I also think it was one of the books chosen by my book club, so there would have been a deadline for finishing it. Years later, I lent it to the niece of a friend, a talented young woman who was selling the most extraordinary series of hand-made comic books about her relationship. She owned a small comic-book shop with her boyfriend.  Once they both helped us pick olives, and he wrote a poem about the olive trees which echoed one of Lorca's. I've seen her once of twice since, playing her guitar with her poet, but haven't had the heart to mention the book. 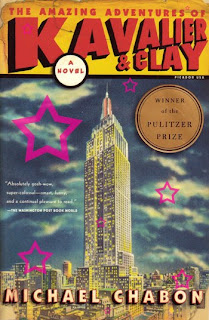 There are others in my catalogue, not always interesting or good. No, mostly interesting and good, that's the trouble. Why lend a dull book?  And I realise, even as I imagine the Lost Book coming back home one day, that such a thing is highly unlikely. It's made its life on another bookshelf now, and there's a certain logic to it being there in fact. Surely it fits where it is. And I guess I like that the new owner is linked to me via the book - after all I touched those pages first ... Or perhaps it was never read but simply shelved, and sent off one day in a cardboard box to the local school fair. Well then it really has gone. But you know, when you least expect it, in the oddest way sometimes, a book can come back , and it's like it never left.
Posted by Mary McCallum at 12:34 AM

Labels: catalogue of lost books, the amazing adventures of kavalier and clay, the incredible lightness of being

thats like the Eng Lit books you bought secondhand that my sister had made special pencil annotations in!
The one I most regret lending was a book on airbrush art- the first one I could afford to buy with the proceeds of a big commercial illustration job- it had fab pics in it through the decades and i lent it to someone's fairly disinterested daughter (the parents thought she had talent) and she never returned it despite my asking. I'm sure that ended up at a school fair- but maybe its on an artist's shelf now. I hope, I hope...

Yes I adore those Eng Lit books I inherited from your sister Fifi - I didn't dare mark books, but she'd scrawled all over them. Terribly useful if I missed a lecture... And you never know with your airbrush art book, it might still turn up... Whena's brother had my Eliot...

I love the book, "The Unbearable Lightness of Being". I lost my copy somewhere in the transit of life and then just recently my in-laws gave me a box of books for a school fair at my son's school and CURIOUSLY in amongst the usual suspects, Jeffrey Archer, Bryce Courtenay et al, was "The Unbearable Lightness of Being". Needless to say, that one did not make it to the School Fair.

Don't ever bother with the film of "The Unbearable Lightness of Being". It was just a stroll through the narrative thread without the philosophical excursions which make the book so wonderful. Even Daniel Day-Lewis couldn't save it.

Ditto for "Even Cowgirls Get the Blues" by Tom Robbins. All those wonderfully funny philosophical tangents couldn't be translated to celluloid and the film was a shadow, a mere ghost of a wonderful book.