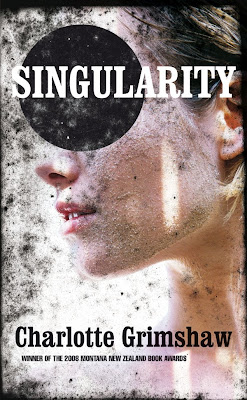 I reviewed this book on Radio NZ National today in just over six minutes. It could have done with an hour. 'Next time!' said host Kathryn Ryan. Oh , if only. In fact, Kathryn was cursing the time taken up by the musical link between the 10 am interview and the book review because Singularity is one of those books that takes you in so many directions it is worth spending time on.

At this point, if it didn't give away too much information, I'd show you my 'map' of the relationships between the characters in the Singularity stories, and between that and Grimshaw's masterly collection Opportunity that won the Montana gold medal last year and sold by the truckload. Instead, I'll just have to talk you through it. There are essentially five key characters in Singularity and Emily is the nexus, perhaps even a kind of protagonist, because she is the link between the two families that pop up in various guises through the book. The other main characters are her brother Larry, Simon [the doctor in Opportunity who watched an ant climb up a speculum and into a woman's vagina], Simon's brother Ford, and Reid who was the undercover cop in Opportunity [the collection and the title story of the same name.]

The Singularity stories are knitted together far more than they are in Opportunity. So much so that I spent an hour last night flicking through the book, and then going back to Opportunity, to draw up my 'character map'. Discovering the links is hugely satisfying.

In Opportunity, for example, we saw Reid from the point of view of a young woman flatmate with a crush who - when she is violently spurned - wreaks revenge in a way that is both subtle and dangerous. In Singularity, we see Reid from his point of view, his relationship with a woman who claims he raped her, the ensuing trial, and his reaction to the ex-flatmate's attendance in court. Wonderfully, Grimshaw's stories can also echo real life. The undercover name for the cop accused of rape is Brad Richards....

We get to see inside smaller characters like Viola who 'stalks' the doctor [Simon]; we see her point of view and the motivation behind the way she acted in the first book and the second. In fact, this is the reason this collection isn't some kind of post-modernist novel: each story is self-contained, so it allows even the most minor character his or her day in court, something that would unbalance a novel. At the same time, as I read Singularity it became harder and harder to judge a story on its own merits. Each one is so clearly linked to what's come before and is about to come.

Grimshaw is also a writer of ideas which she threads through the stories, letting them surface and recede and shift, much like her characters. A singularity is the point at the start of the Big Bang, and - I think I have this right - the pinpoint to which we could return when the universe finally expands to its limits and creates a black hole to suck us in. Inside the collection there are all sorts of 'black holes' from Uluru/Ayers Rock which is a kind of absence at the heart of Australia to addiction of one sort or another to a character's migraines. The black hole is also representative, it seems, of threatening nature, the tedium of the suburbs, a physical stasis, an unemotional/controlled personality, and a watchfulness which - in some people - becomes the writer [ there are a few writers in the collection.]

At the edge of this darkness are such things as life, light, ease, children, animals, action, humour, those competent in the world and, possibly, God. These themes tease their way through the stories and are hugely satisfying to track and trace alongside the developing characters.

As I said in the radio review, Singularity is a collection of dark diamond-hard stories, well-crafted with superb language and dense characters. The stand-out story for me was Paraha where Emily (aged eight in this story) and Larry (10) and another small boy battle a difficult bush track and arrive at Karekare Beach to distraught parents. The writing delineates the sheer oppressiveness of the exquisite landscape, and the implacable face of nature, in a way that both chills and thrills in equal measure.

Posted by Mary McCallum at 7:43 PM