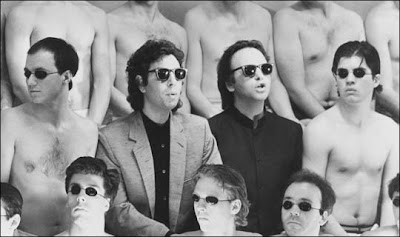 'I do believe that pure literature created in the laboratory is a
vital part of a writing culture, but at the same time it's not necessarily better than that made through messy sex between the writer and the marketplace.'

This was part of a comment I made on the NZ lit blog Leafsalon a few days ago in response to a thought-provoking post by guest-blogger Maggie Rainey-Smith (author of About Turns and Turbulence.) It's a discussion on the conundrum voiced so well by 10CC (pictured here I hope):

'Art for Art's sake or Money for God's sake?'

Maggie compares Greg O’Brien’s Janet Frame Memorial Lecture delivered this month and a talk given by Sophie Hamley, an Australian literary agent. (Note, if you missed it, Greg's speech can be downloaded at the link above. It's worth reading. As one of our few Renaissance men - he's an artist, poet, essayist, art-writer, editor, illustrator, curator, philosopher - his erudite and elastic thinking is always an adventure.)

'Greg talked about the ‘laboratory’ versus the marketplace. His lecture was all about the idea that the art of writing and being a writer is separate from that of being a published author. He quoted Roland Barthes in saying ‘the author performs a function, the writer an activity’....

... In contrast, Sophie Hamley was the guest speaker at the NZSA/Book Council/NZ Bookmonth-sponsored event. It was an international exchange – a literary luncheon if you will. Sophie is young, professional, savvy and most definitely passionate about writers and their publishers. She explained the difference between writer and author – the idea that if you want your work published and read, you need to understand what it is to be an author.'

Interesting stuff. First up in the comments is 'Islander' aka Keri Hulme:

'Maggie, this is a wonderfully thought-provoking post.I've been wrestling with the writer/author dichotomy for a couple of decades.I am a writer (I've been one since I was 7 and pasted together my first written work.) I am an author (I have 7 published books)…but what an author is supposed to be & do is now determined by market-driven factors with which I am not at all comfortable ....'

Other comments come courtesy of 'Kingi' 'Chris H' 'Unthank' and Greg O'B himself. Here's some of my take on it:

'Greg's speech is inspiring I think because it is a call to remind us to aim for brilliance, to take risks, to be 'absurdly ambitious' and to pursue writing for its own sake. He says: 'far better that writers aim for largeness of vision, dynamism and risk, and then fall short…' He was talking about writing awards there, but the comment applies as much to the 'marketplace'...

... My novel (The Blue) is a novel written with publishing in mind. For a while there it was a crazy hybrid of poetry and prose with a nebulous plot. I believe thinking of it as something I wanted published placed demands on it which made it better.

I think anything benefits from having demands made on it (people included) therwise they can be come self-centred and ingrowing and often irrelevant. Literature is partly about having a readership (as someone else commented here) because then a relationship between writer and reader is established and the work becomes something else again.

I do believe that pure literature created in the laboratory is a vital part of a writing culture, but at the same time it's not necessarily better than that made through messy sex between the writer and the marketplace.'

Comments welcome here, or go to Leafsalon and add to the discussion over there. Or if you'd rather, go to Youtube and watch 10CC in 1975 in the tightest flares I've seen in a long time. The final quote on this post can come from them:

Which ties it all up rather neatly, really.
Posted by Mary McCallum at 9:35 PM

What an interesting discussion going on at Leaf Salon. I do like your messy sex between the writer and the marketplace comment, and sometimes I feel that for those of us who actively try to promote ourselves in the market place, it's guilty, messy sex.

I didn't realize we were participating in the worlds oldest profession -- oh right - maybe we are.
Alicia